The next day after the scheduled backup to my NAS, the ABB agent created 2 BIG BIG local snapshots on my Mac, one of 416GB and the other 157GB (total=575GB!!!!) Of course I'm now running out of disk space on my Mac, thanks to those snapshots

Why ABB would create local snapshots and leave them there after the backup?
How to I get rid of those local files? --- would a simple Task delete on the NAS do the trick?
I could do a simple sudo tmutil deletelocalsnapshots but I'm not sure if I should

Are you sure the backup has finished transferring?

That is simply bizarre. A competent image backup program would not use the client machine for storage, even temporarily. Are you certain you set up everything correctly?

This would be a new low for Synology coding, if true.

@Telos My point exactly too: When I saw that (and it took me 4 hours to find the d*mn cause: those files are pretty much buried deep) I was flabbergasted too: local backup snapshots?!! WT?!! The guys at Synology are studying my case. I sent them the ABB agent logs and some snapshots. They're might be indeed some coding correction needed. As far as me setting everything up correctly, well it worked before and tested restoring some files and it worked also.

New development!
This is what I sent to Synology:

FYI
1. The ABB client doesn't start at login by itself (there's no option to start at login in the setup). So, from now on, I guess I'll have to add it to the login items (control panel, general, login items).

2. (and because of 1.): When you asked me for the logs, I had to start the ABB client (it was not running - I must have rebooted before). Then, after that (and I don't know how long after but) my free space went back to normal *see picture

3. Now, when you list all the snapshots remaining though, you still can see one belonging to ABB: com.synology.activebackup.AtQLhWG8, but much smaller *see picture

I just checked and seems ABB on Mac does run without first launching the app. I updated to macOS 13.2 earlier today and only logged into my account without starting the client. It doesn't look to be listed in Login Items, yet I was able to initiate a backup task from the ABB console on the NAS. This is the behaviour I have seen on Windows.

Here's my Mac. It still has Time Machine configured (though that NAS has been offline since yesterday) and has the two ABB snapshots too. 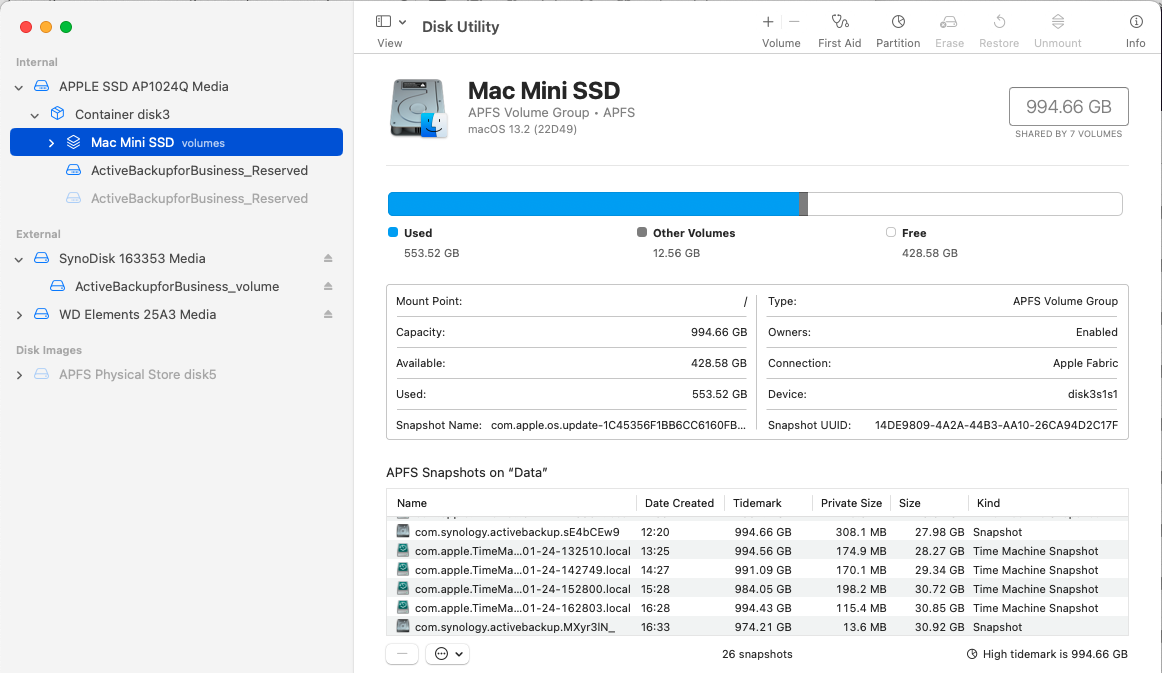 If I look at storage usage with DaisyDisk I find the same information in the hidden space. 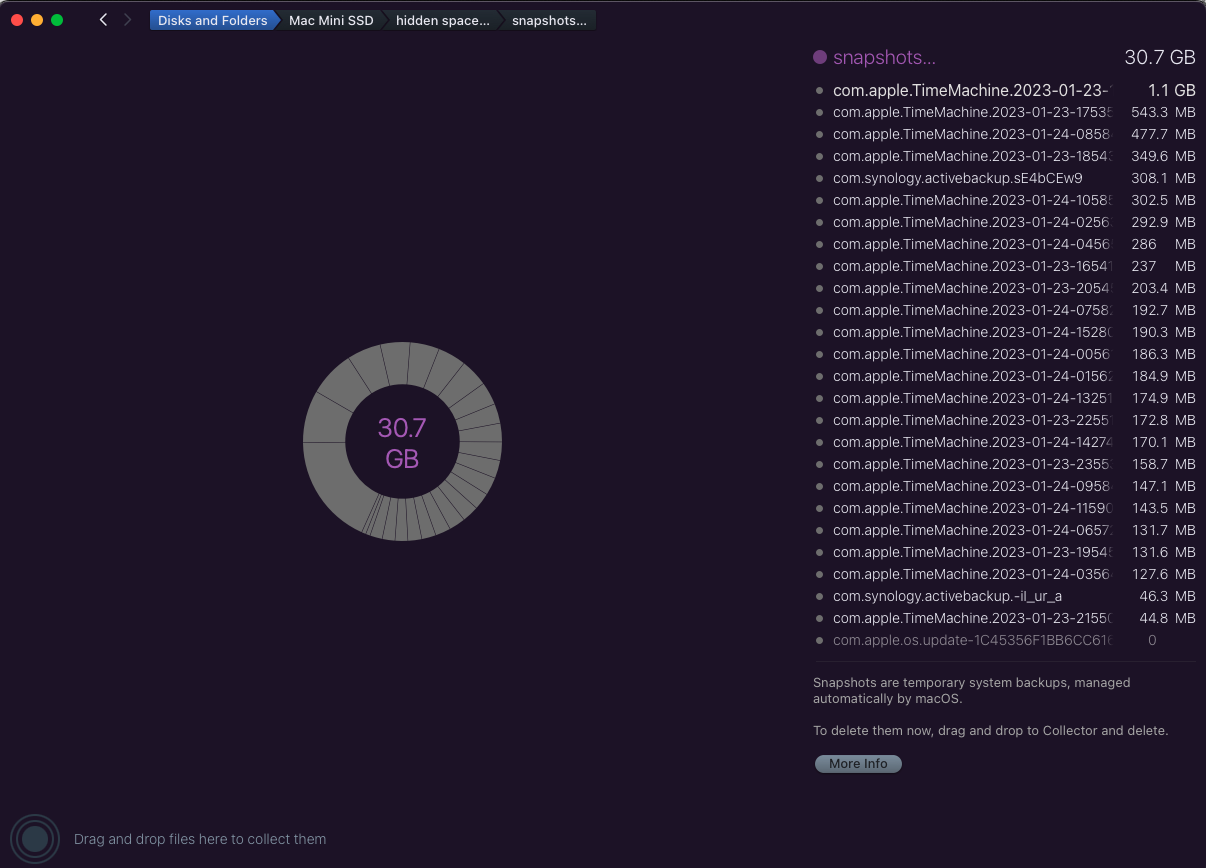 They have a help page on snapshots: DaisyDisk, the most popular disk analyzer for Mac

Free up gigabytes of disk space in minutes using the visual interactive map that reveals the biggest space hogs on your disk. 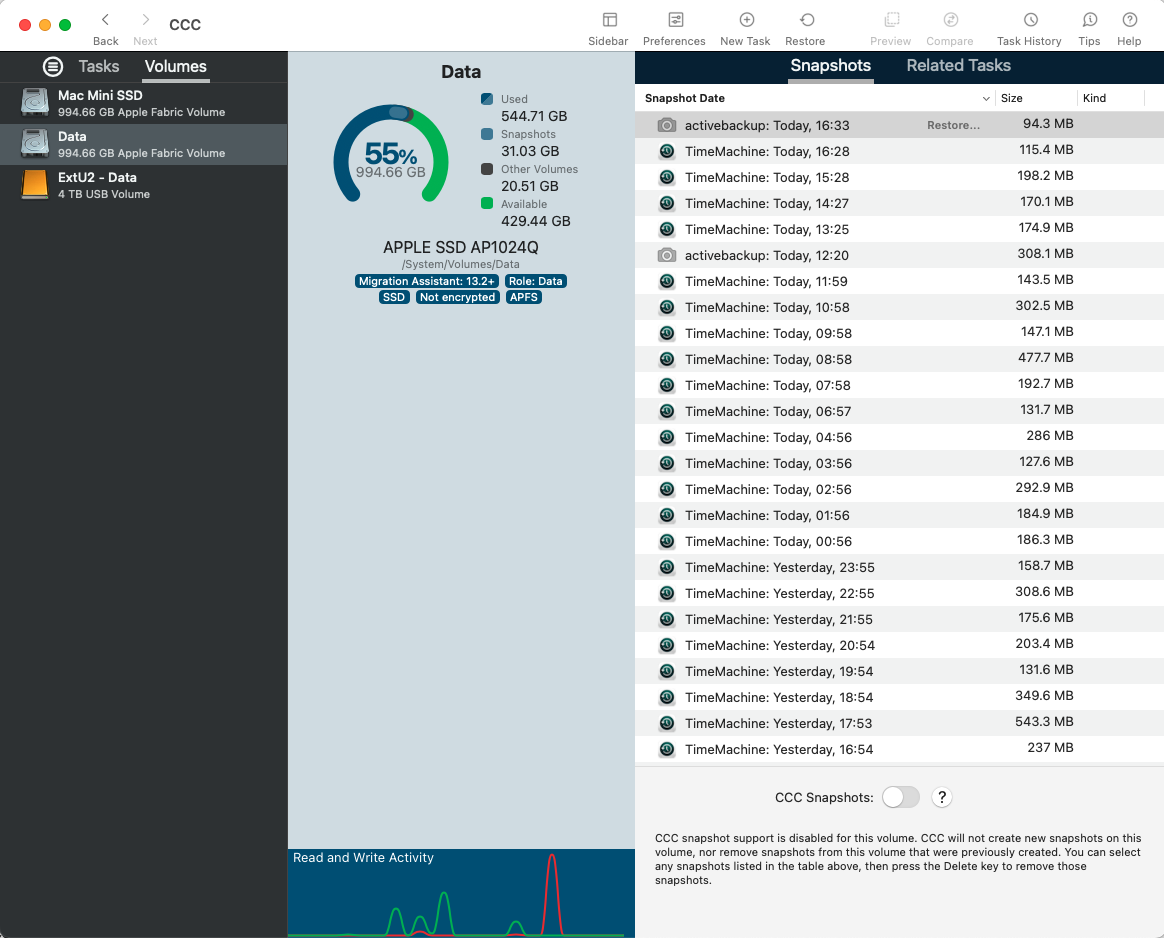 And also has help on snapshots too.

From reading these articles on snapshots, it sounds like the intention is to use local space as a temporary storage until you need the space for real stuff. This is how Time Machine used to work on Mac Books, using a hidden MobileBackups folder (or similar name), so that they could continue to save restorable content which was then archived to the real TM device the next time it was present. This also speeded up entering Time Machine browser.

You may find that the ABB snapshots shrink after the backup task has completed. Did you change a lot of files recently?

Indeed I was ripping BluRay discs!! So I kind of filled my disk up, but my problem was that even after deleting those .mkv files, the space wasn’t released by the system. It was only released when I manually started the ABB agent..
I’ve read what you’ve detailed for me and I appreciate the thoroughness - It was pretty interesting
Thanks again
Johnny

-- post merged: 25. Jan 2023 --
@fredbert
Can you confirm that, for you also, if you reboot, do you see the ABB agent icon in the menubar or not?... That's why I added the agent in the Login Items, and only for that because indeed, my NAS has always been able to backup my Mac way before I added it in the Login Items.

I can confirm that the ABB menubar icon is not present after rebooting/logoff-on. This is the same on Windows, where the ABB taskbar doesn't have it running in the apps (along the main part of the bar) or as an icon (that right-hand bunch of stuff). But in both systems the background ABB agent is running and can initiate scheduled/triggered backups, and can respond to ABB console to start a backup.

If you do exit the ABB app on Mac or Windows it closes with this message:

I don't blame you for being unsure about what is going on, the Mac's app has built in help that only discusses Windows and Linix installations. Plus any errors raised by the Mac app during a backup are linked to a Synology page that has never listed the actual errors that I've been directed to 'find more about'.


Doing blu-rays will eat up space like it's going out of fashion I don't do much of that, but worth keeping an eye on usage.

@fredbert
Thx for the info about your own setup
FYI, adding the ABB agent in the Login Items (System Settings, General, Login Items) will add an icon to the menubar without anything showing up in the dock (at least that's what it does on my mac)
Cheers

D
DSM 7.0 ABB agent says my certificate is not trusted and won't accept my login
ABB is probably using some WOL protocol. If that is the case I see you’re using a laptop, which would be...

13. Jan 2023
Gerard
G
T
ABB agent automatic update at clients in isolated network (no internet)
That's exactly what I tried. It does not work.

ABB agent on Windows 10 not running after reboot
My guess would be this. The same thing is known to happen with a remote HyperBackup. If your destination...

H
ABB for MacOS : Error when trying to backup
I didn't have this problem, but when I tried to uninstall the hidden user account (using options in boot)...

22. Jan 2023
yatesd
Y
Z
ABB - File Level Backup for PC?
File Server is exactly what I am using to get around it. The only unfortunate thing is that I have to set...

ABB client troubles
Sorry, it is a LAN backup. Am also using the NAS static IP for the address. I did see in a forum to set...

B
ABB Physical Server vs File Server
The physical server works using the ABB client that as a result has benefits like using the recovery...