Question Camera does not come up after a disconnection!

Currently reading
Question Camera does not come up after a disconnection!

Totally new to Surveillance Station and I have a problem already! I'm trying it with a Hikvision PoE H.265+ camera.

If I choose the camera and disable it then enable it again, it says activating, then comes up for about a minute then says disconnected!
When all of this happens, I can use the camera's web interface (static IP address) to access it with no problems, so it's alive!
Interestingly too, using the "test connection" in SS shows a picture of what the camera is seeing and a green tick mark below it. So SS knows that it's there!

The only way I could rectify this is if I delete the camera completely on SS and reconfigure it again!
I've tried a power adapter with the camera instead of the PoE switch (just in case) and the same happens!
It's like it comes up, looks for something and it can't find it, or maybe it finds something that shouldn't be there and dies!

Deleting the camera and reinstalling it fixes this. Until I disconnect and reconnect again!

Any help? Puzzle of the month
(I don't think I've used this many exclamation marks before!)
P.S. I forgot to say that the Hikvision is on the compatibility list!

I've noticed something. When I recreate the camera in SS, it's always added using h.264!

Although I've configured the camera via its web interface and set it up to h.265. When I re-add, it overwrites it and set it up with h.264! Stupid piece of *.

What's the use of paying extra for the latest codec if I can't use it! I really hope this is not the case. Compatibility list my a**.

I have a couple of HikVision cameras running H265+ no problems at all, and they come up just fine after a power reset, disconnect or NAS restart

Thank you @tb123. So there's hope then. I really like the camera.

I'm trying to find if I'm on the latest firmware. Hikvision's site is a colossal mess. Found the place for FW dload but nothing for my model. Contacted them asking if they can point me to the location to dload the latest FW. They replied with a silly form to fill first!

My Synology raised ticket was answered with "why do you disconnect the cable, that's extreme?!"
Ignoring every detail I've mentioned about the problem of course!
It's like they're on a different planet!
T

Last edited: 12. Jul 2019
Haha, no, mine are DS-2CD2355FWD-I.
In SS Application Centre make sure you have the latest device pack and depending on firmware versions in the camera, you can select the firmware versions either above or below a certain version (well you can for my cameras anyway). 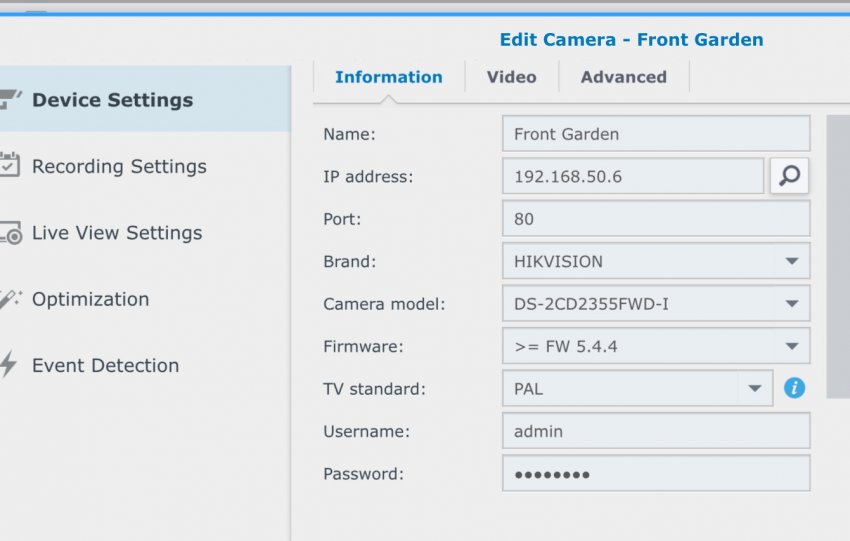 Thanks. Strangely I don't have the firmware field below the model at all!
I checked the device pack and I'm on the latest.
Now that you've mentioned it, I have a feeling that the solution is around this area.

I see that I can do a device pack "restore". Does this mean that I can start building the compatibility of my camera on a clean sheet?
Not sure how this works.
Is that a good plan?
Appreciate any suggestions here. Thanks.
T

I guess so, well, I don't have a better one. I remember discussing the firmware version field in the old forum with, Briolet, I think. It appeared after a certain upgrade, but cannot remember why or when
T

ok, found it, although it was only after upgrading to 8.2, which I assume you have?
SS 8.2 and HikVision camera setup - Synology Forum

Thank you for taking the time to find it.
I'll set sometime to experiment with this during the weekend.
T

In the link I posted to the old forum, Briolet had examined the config in the device pack, I noticed that for their camera model, there does not seem to be a h265/h265+ option. Could you check the device pack for your model and see what codec options there are?

I've got another one (we ordered two). This one is DS-2CD2T55FWD-I5. Interestingly, it shows the firmware field, unlike the other one, and it has no problems coming back up after a power cut when configured to H.265+!
I believe it's something to do with the device pack. I’ll try to check it as you said (I don’t know how yet). Although on the compatibility list, H.265 is supported!

Synology support replied and they want remote access. I don't think so.
T

Last edited: 13. Jul 2019
Of course genuine. Warranty, Hikvision seal and serial number
BTW, I did the Device Pack reset before installing the new one too. The other one still behaves the same.

I took screenshots of the two configurations and updated the Synology ticket.

BTW, I'm trying to change the date format that appears in live view to yy-mm-dd or yyyy-mm-dd. Not able to do that!

If I access the camera's web interface with admin, I can see the option but changing it and saving gives a parameter error (tried that on both cameras).

On SS all I have is "enable/disable". No format.

I'm in touch with Hikvision support. But language seems to be a problem.
He wants Anydesk to access the camera. I said I'm not using Anydesk. I'll give you remote access. I'll forward the ports to the camera.

He replied:
"Sure，if your laptop can access the camera, I can assist you remotely. Please download a laptop and attach the anydesk ID ,thanks"

Can we download a laptop nowadays?! I must've been hibernating longer than I should in my cave.

So no Anydisk nonsense. I sent him the URL to the camera. I hope he doesn't comeback and say, download a desktop. That would be too big for the cables!

WST16 said:
If I access the camera's web interface with admin, I can see the option but changing it and saving gives a parameter error (tried that on both cameras).

He replied saying "Sir , could you try set the camera as default ,then configure that again"

I've done a reset (the power on button method) before asking for their help, and I told him so in my first email and he's got full access to it now. I don't know what he wants me to do!


tb123 said:
I actually get the same error as you do if I try and change it to YYYY/MM/DD
Click to expand...

So you're stuck with live view date as mm-dd-yyyy like me
If Hikvision support is what it is so far, abandon all hope. I like the camera but I guess I'll have a note to self to try something else in the future.
T

Mine have always been set to dd-mm-yyyy, I only tried changing it to help a brother out

FWIW, a final update (as a reference for the aliens when they land and need to connect their SS to the cameras)…

I gave up on Hikvision support. Nothing has changed and whatever it is, it was lost in translation

I think we might go with an NVR and save ourselves the headaches. We figured that it should be more responsive, less expensive on the long run as we need to add more cameras and with better features since it's a dedicated device.
Still exploring.

Synology came back and said (among other things):

"If there's no selection for the firmware, then it means it's using the latest one."

"…Better yet, just avoid power outage altogether (I would opt for this instead to avoid damage to your DiskStation) and use UPS to prevent abnormal shutdown. UPS device can allow DiskStation to shutdown safely and automatically in event of a power failure."

And they pointed me to the UPS compatibility list!
Did I say anything about the DS power?! Totally not related to my issue!

I'm sure the aliens won't tolerate such support when they need it.

24. Apr 2022
gingmeas
G
J
Live view shows grey screen for each camera
Ok thanks. My settings are the same. I'm on 7.0. It has to be a simple setting so will keep trying.

H Help with Reolink ipi camera
No I haven’t tried as it’s still in a sealed box and do not really want to try and set it up as if it’s...

E
Upgrading a camera system. How much improvement will I see?
I understand where you're coming from. But for such a big solution that's vital to the business, I might...

DSM 6.2 Surveillance Station timezones per-camera
Slightly off topic, but for a few years I also used a Raspberry PI as a time server... It worked but then...

S
dahua ip camera's
For me, I had camera's going off line, I thought I'd had wiring trouble, just kept tinkering with it...