Catastrophe, support needed. Corrupt files across the board

Currently reading
Catastrophe, support needed. Corrupt files across the board

Last edited: 29. Jun 2022
Hi, I am in quite a pickle. I was using Synology Drive Cloud Sync, to synchronize files with OneDrive. If I am correct, this process has caused mass file corruption and deletion. Let me explain what I mean by file corruption:

Suddenly most PDF’s can’t open. I get an error that the file is corrupted or what have you. Similarly, I am finding word and excel files that can’t be opened.

Specific to PDF’s, when I opened a couple of them with text editor, they say “CLOUD SYNC” at the top followed by some mumbo jumbo referring to an encryption key. So I don’t feel I’m out of line suggesting that Cloud Sync is the culprit. I was really surprised to find it was apparently intentionally altering the files. But while a major number of these occurred in the last several days, it appears there are other corrupt files going back weeks.

And as I said, it appears To have been deleting a lot of files also.

And other problems include files/folders with long strings of numbers and letters and ending in $sshnew$ and $sshold$ There are files and folders that are duplicated and end in _1 but neither the original or duplicate can be opened. 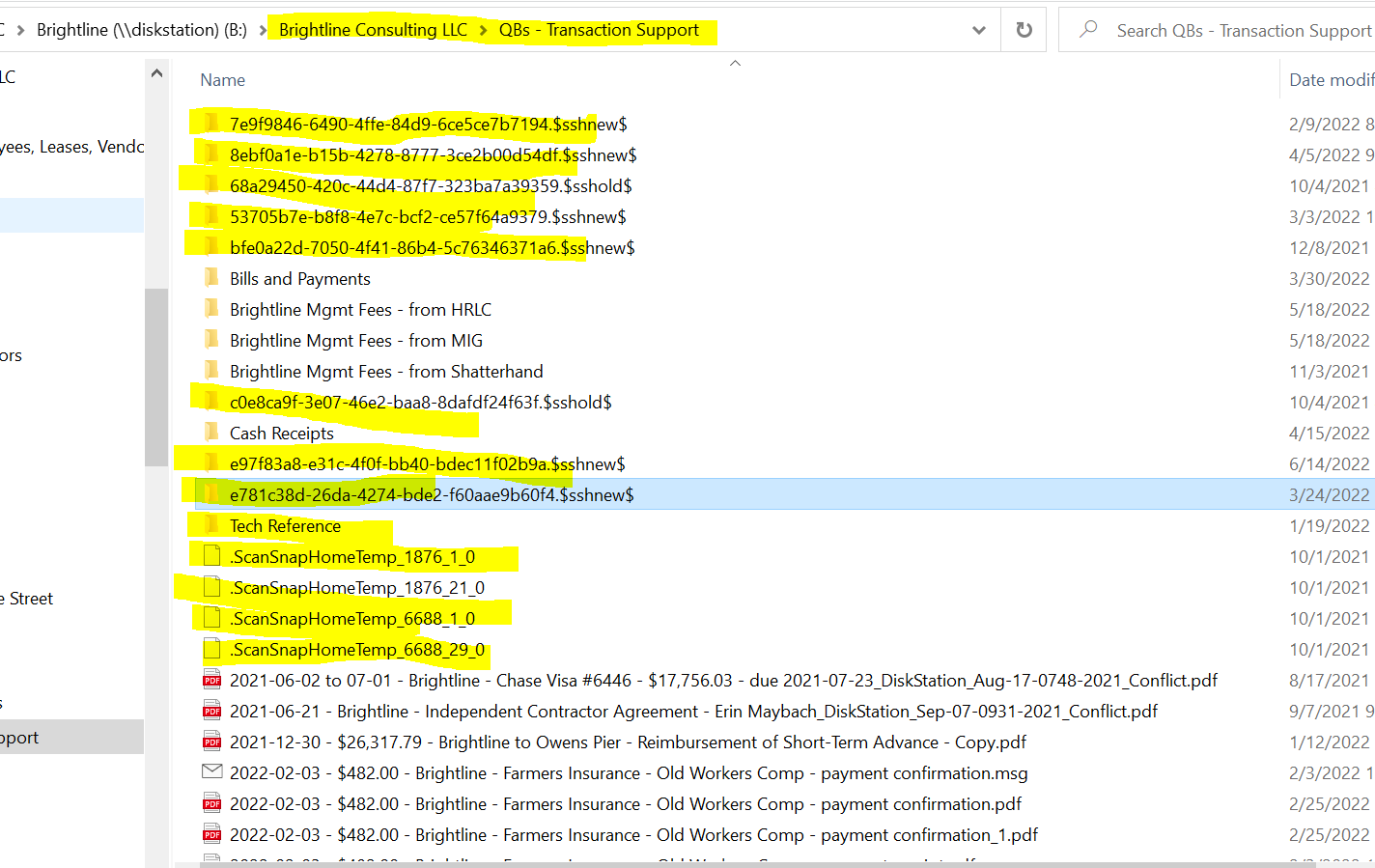 Anyway, waiting for Synology support has been a nightmare. They keep requesting a remote code, then missing the time before the code expires. Meanwhile this major corruption of files is causing a great deal of pain.

Is there a way to revert everything back in time, or another way to get all these files reverted to their previous form? One at a time will be a nightmare, because it’s thousands of messed up files.
Sort by date Sort by votes

AtariBaby said:
Is there a way to revert everything back in time, or another way to get all these files reverted to their previous form?
Click to expand...

Hi and welcome to the forum.

Sorry about your current state, but do you have a backup of these data? It might be a fast and solid way to restore them that way.
Upvote 0

This may be caused by resync when you messed up with the encryption, i remember a similar issue and all files were restored as encrypted files in stead of normal.
did you change the encryption setting or restarted a new sync while one side was encrypted?
Upvote 0

AtariBaby said:
Is there a way to revert everything back in time
Click to expand...

By restoring it from your backups.

Because you do make backups of your data in someway, right...?
Upvote 0

Have you tried the Cloud Sync decryption tool?

B
RAW (DNG) support with Synology Photos ??
There was always an issue with RAW (DNG, in my case) formats being supported by Synology. I hoped it would...

2. Jul 2022
bjlaw1979
B
D
Does Active Backup for Business support scheduled restores
No, backups only.

G
How to complain about Synology Support
I'll agree with EAZ on this - not something I'd sweat. DSM should be quite adequately able to monitor...

Synology Support (web) is a highway to hell
I'm afraid it's not possible for most of the population that their brain uses more energy than any other...

admin login on NAS necessary for Support access...
I am still awaiting them to tell me they are finished with the DS CAM issue

G
Poor Synology Support
I don't have a motivation to save Synology position, but the problem comes from Intel. Of course Synology...

I
Synology Support ...
My post was a bit garbled, no European telephone support, confirmed by UK head office.