Maybe that’s the least of our problems. Humans are getting canceled

I tried @Shadow 's link... It worked in preview but failed when posted. Something else is going on.

Telos said:
I tried @Shadow 's link... It worked in preview but failed when posted. Something else is going on.
Click to expand...

Agree, this image could not be fetched. But it's not an issue on our side.

I hope it's not corona (to get back to the topic).

perfect, thx for such post
it’s a confirmation why some part (provinces) of heavy affected regions in Italy have different spread index [infected/population density] what is also under my analyze now. When:
Bergamo is about 3416(infected)/400(sqkm2)= 8,54 active infected per sqkm till now .... COVID-19 center
Brescia
and nearby province with major city:
Milan is about 1750(infected)/2000(sqkm2)= only 0,875 till now

There is still one generic point - combination of Extensive distancing and forced (country, regions, cities) quarantine can slow down the trend.
Otherwise your countries will boost infected people every new day.

...and here is an explanation, how “red zone” quarantine never works (part of article from dw.com and date: Feb 24th 2020):
Authorities have decreed that nobody may enter or leave the "red zone." To enforce the quarantine, two uniformed Carabinieri — Italy's national police — have taken up position on the village road. But despite the blockade, they are letting farmers on tractors, cyclists and locals bound for the supermarket or pharmacy in the adjacent "red zone" pass and return. Enzo, another Vittadone local, says the officers will let anyone pass who can provide a good reason. He's been in the "red zone" to do his shopping before, and thinks it's not right to keep locals on lockdown like this. In his opinion, measures taken by local authorities and Italy's national government are too drastic.
T

Well, Corona has turned into a Global full blown panic fest now.
i work for a major utility here in Australia, we all got sent home today to WFH for the next few weeks, no food, toilet paper or hand wash products left on the shelves, peeps gone crazy!

Brace yourselves. The stock markets all over the world are a blood bath.

It’s like a Bond movie, only Bond didn’t get to stop the villains in time. Maybe someone, somewhere is patting their evil cat and laughing!

We may never be the same...

Al This WFH and travel restrictions will be good for the environment. But boy, this shopping spree of people is too much... this toilet paper madness is out of control...

There are quite a few newspapers I've finally found a use for! 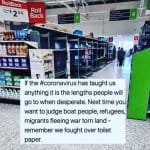 Seems to be in good way - this is an answer for another analyst
Blue line: percentage of Day to Day increment of new confirmed cases, excl. recovered and deaths in same day
Green line: calculated Average for previous 7 days = comparison of the real and ongoing trend data 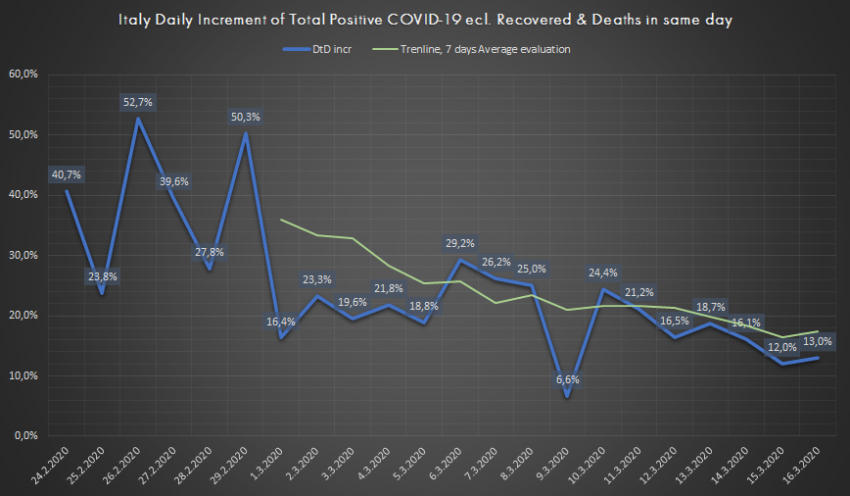 same is readable from another perspective (chart below):
- there is still valid Pareto principle, that only 4 from 20 IT regions make impact to the heavy numbers (76% of active infected)
- there is living 40% of total IT population
- Lombardy (46% of the active infected and 42% of the mentioned 4-regions population) is on decrease of the Day to Day infected = then you can see the decreasing effect in the chart above 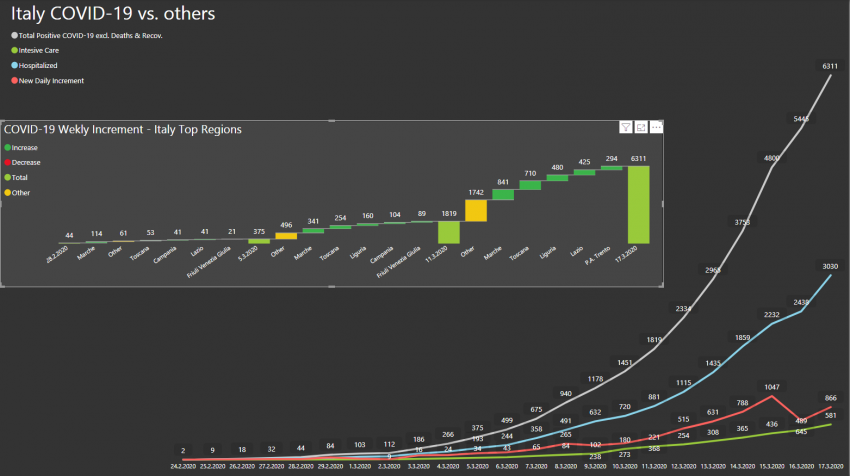 Pls, don't take it as kind of impertinent description, mostly when you read about people in hospital (mentioned as "only"). Every such infected person is bad news. But we need to read clear data, when we like make a consideration or data modeling. I have seen many of them, include Angela Merkel prediction about 70% infected population in Germany. WTF. As you can see, there is still math about 0,05% of total Italy population. And more important, that 46% of the infected people we can count in single region. And there is obviously decreasing trend in last 17 days.
Lombardy approach to handle this virus story must be for us as kind of negative example.

Ok, what the hell? I thought my boss was insane with stats but this is a whole new level. Where do you get the time and will to do this? Personally I really don't care about this whole situation. We follow rules, stick to what was suggested and that's it. I have to say that my life day to day operation has been 0 affected by this situation, and I mean 0.

"Welcome my son, welcome to the machine. Where have you been?"

No, no. You misunderstood me. I asked time and will, not tools. I know this is PBI, the whole forum stinks of that M$ platform, I was just curious about will and time. Still kudos man, keep crunching those number

Rusty said:
No, no. You misunderstood me. I asked time and will, not tools. I know this is PBI, the whole forum stinks of that M$ platform, I was just curious about will and time. Still kudos man, keep crunching those number
Click to expand...

someone spend a time with hockey, someone with bike, someone with books
and I have such kind of deviation, to understand what happens. Little bit as my favorite Hans Rosling in his creative data interpretation. Fact-fullness driven 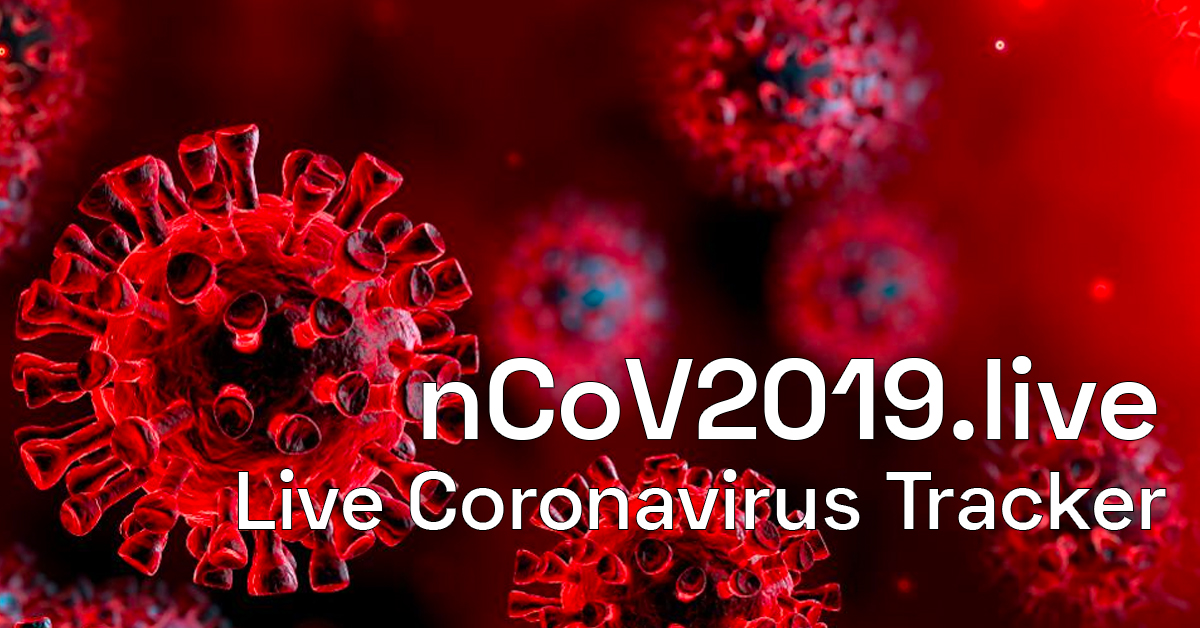 And about the guy that runs that tracking website:

Running cost of 2TB SSD SHR vs HD SHR how does the high electricity cost impact running costs?
It will be a long shot. To answer @Fortran consideration, it is necessary to describe the issue in more...