Just seen a burglar smashing in his own front door in. I said 'what are you doing', he said 'I am working from home'
Click to expand...

why I'm fascinating by Italy data sources:
everything that has already gone wrong has already happened there, we can learn for future
this is part of my data presented to our gov. 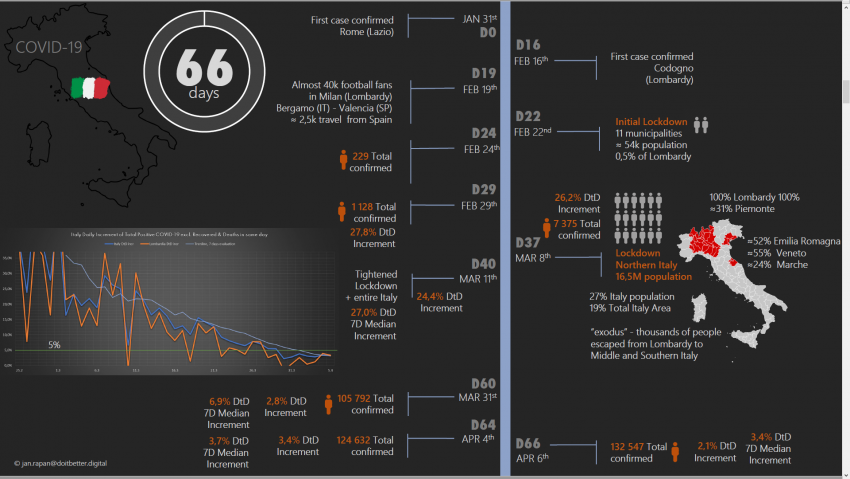 Italy isn't single homogeneous region, you can see the different spread of the virus there 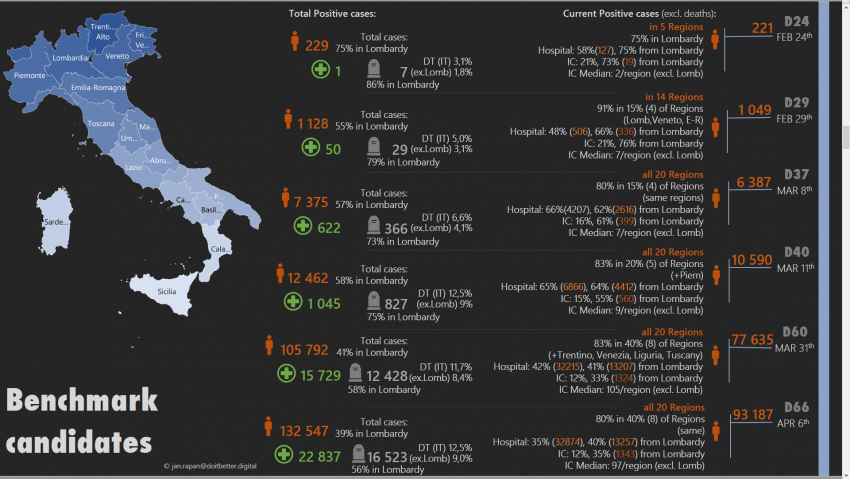 here you can see the spread across the Italy

and here is the magic - when you need build a data model of some spread - you have to create useful benchmarks, for a comparison of your results. Otherwise you will just shoot in the dark. Then I found similar regions in Italy based on:
- population
- area
- density
- GDP (economy data for better understanding of the population mobility)
- population in cities/villages
- number of similar cities and population there
- split from regions to counties
- distance from heavy impacted regions
- later discovered infected population than from patient zero
- and many more 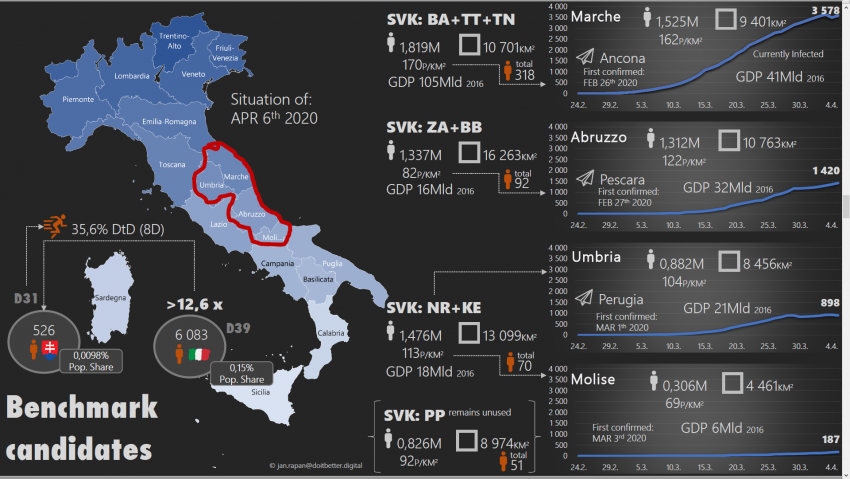 These 4 regions have just 6% of Italy total infected population, but it's 12,6x more than in my country. First infected was discovered 26D (Marche) later from first in Italy. When we would like to "catch" their performance:
- we would have to grow from 6% to 35.6% per day for 8 consecutive days from April 6th, to get some numbers in Day 39. Which seems rather impossible
But when you open eye about daily increment of new infected persons, you will see a descent trend(except really small Molise region). 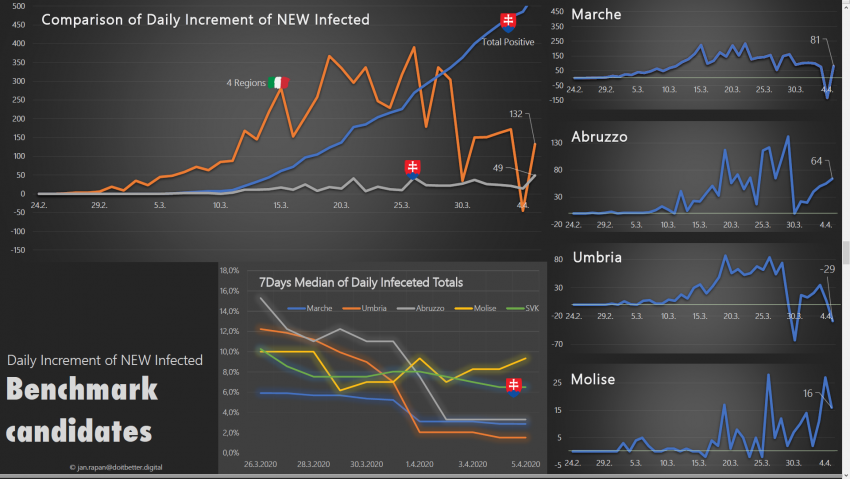 then we should hit in Day 39 just about 14% from their current (Day 39) numbers of Total infected persons. What is 7x less for us. 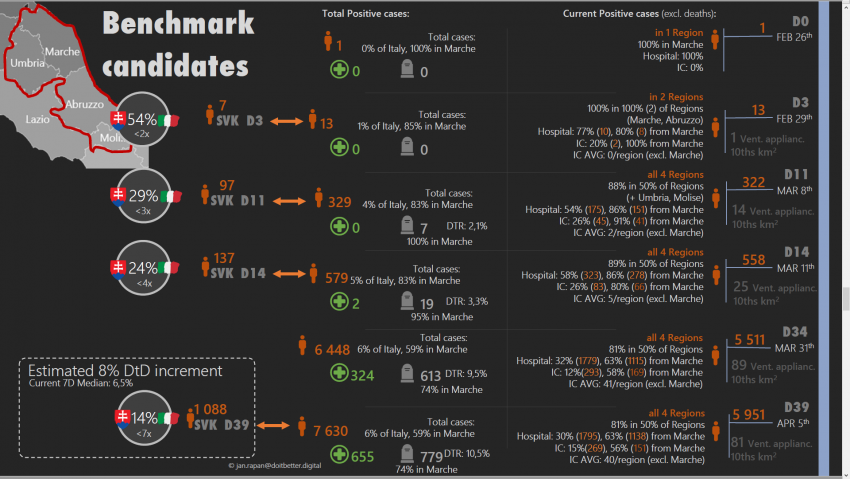 and what about the panic from Intensive care. Just about those 4 regions. Also out of "critical" situation. Just 89 patients in the IC for 10 000 km2. 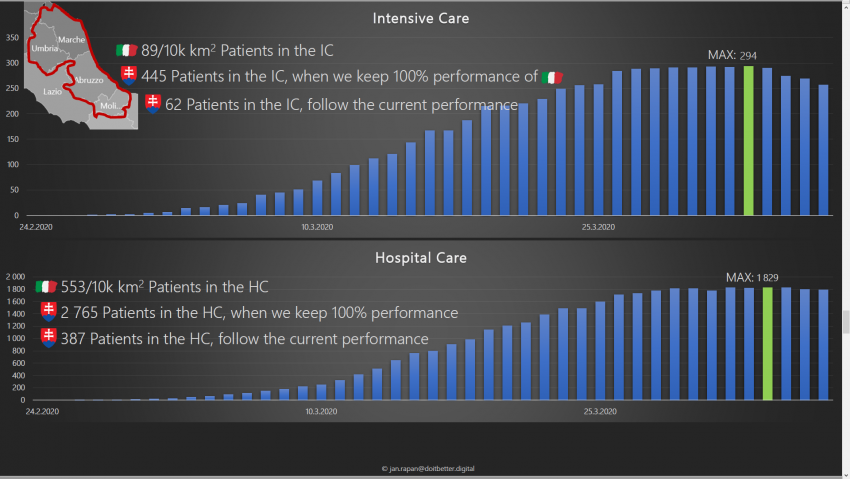 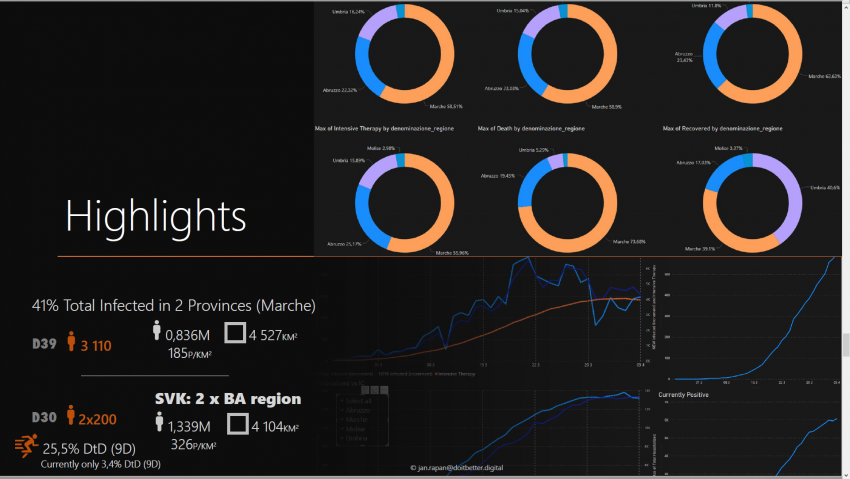 and this is the answer, where you can find a majority of the infected people

Final stage - why was the study of COVID-19 impact to our population totally wrong - because in case they don't compare apples with apples. Just Slovakia with Itay. Shame of them.
Follow they prediction, we should hit over 128% of entire Italy population for Day 60, include -86% of estimated UNCONFIRMED ( but infected) persons.
Just to be sure Italy 60,4M vs our population about 5,5M. 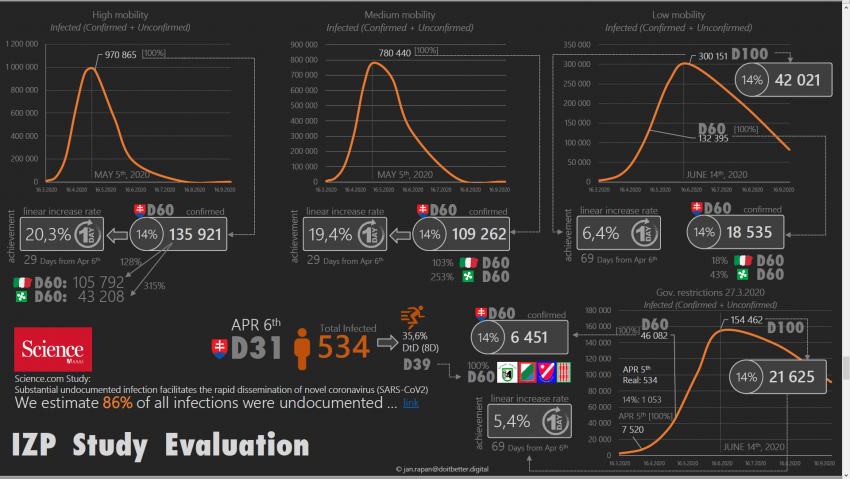 Weird, but I received this from a friend (the cartoon sketch came alive?)... Something odd going on here...

The lockdown (now on week 4) has given me a LOT more time to spend online, including discovering this forum. I've certainly learned a lot just reading these forum threads, so thank you all!

In the physical world, my efforts to combat stir craziness consists of taking the dogs on frequent long walks and practicing vertical social distancing by flying with my son (who lives with us, so all good there). I don't have the words to describe how much getting outside saves my sanity.

Similar here, I'm recently retired and now have my good lady working from home (3 ft) behind me. If I didn't go for the allowed daily walk and get to grips with the NAS I'd be going nuts LOL

It is spring here in the states and for the better part of Spring/Summer/Fall I like to be outdoors rather than indoors. I am getting out once a day to get fresh air and that as well is the only thing aside from finding distractions to keep me from also going nuts.

Running cost of 2TB SSD SHR vs HD SHR how does the high electricity cost impact running costs?
It will be a long shot. To answer @Fortran consideration, it is necessary to describe the issue in more...