Can someone with Drive experience elaborate please?

I didn't install it (Drive) yet as I believe I have no use for it so far (and I'm away from my DiskStations for a while). I prefer WebDAV as it's natively supported by many iOS apps that I'm using. However, I'm looking at it now to see if I can use it to provide NAS access to a RAW photo editing app for iOS that I'm considering as it was suggested by the app support who never tried it!

The iOS app is Pixelmator Photo if anyone is curious. I didn't buy it yet.

The iOS Drive app, like Dropbox's etc, retain a cache of viewed files so that when offline these can still be accessed. You don't get this when using a direct network connection, like WebDAV.

The iOS Files app is also a method to access these locations from within another app that supports the iOS API. For example, the Microsoft Office apps can open 'Places' which includes their locally stored files, option to add various cloud services (inc. Dropbox, OneDrive, and Box) and Sharepoint, plus a "... More" option to use the iOS Files API to access its Locations.

I've a few apps that haven't been updated for iOS Files API and don't support WebDAV or SFTP, for these I have to use Dropbox (grudgingly).

Nice explanation. Thanks.
In your opinion, taking Pixelmator (or any iOS app for that matter) out of the equation for now. Do you feel that Drive on iOS is missing something when it comes to supporting iOS Files (as the review says but doesn’t explain)?

My preference is not to have cashed offline RAW photos but to cache them for editing only and then when I "save", Pixelmator or whatever app (using Drive) updates the file on the DS without keeping a copy on the iPad. Just like how pages, numbers and keynote are doing it via WebDAV now. I don’t want multiple copies of a file scattered around. Just in one place.

I guess the only way to find out is to cough the $5 and try it (to their credit, they said they provide a refund option in case I’m not satisfied).

I just love the idea of being able to edit RAW on the iPad Pro with all its power.

Just found I had the Pixelmator original app from when we had a budding artist.

Within this variant of Pixelmator it looks like it only supports iCloud Drive, yet when tapping the iCloud Drive menu item it brings up the iOS Files API. Tapping the Browse button returns to the Locations list and there is Drive and all the other sources.

Testing with a sacrificial photo in Drive, when it is selected from Pixelmator it would seem to make a copy in Pixelmator and this is what is worked on. I don't see how this would be different if using Dropbox, iCloud, or whatever. You then copy the worked file back to wherever you decide, it doesn't have to be the same place. Copying the file back is either using the commands 'Save a copy', 'Open in another app', 'Send to iCloud Drive', in the process you select the saved file format (in this app there is no RAW, but I think it's older than the one you're looking at). For the iCloud Drive option, I see Drive listed and it's possible to copy back to the same location but it doesn't overwrite the original: so photo.jpg would be saved back as photo (1).jpg.

Thank you for checking @fredbert. I have pixelmator too and was thinking the same
I’ve asked their support if testing with pixelmator would be the same as testing with Pixelmator Photo.

Unfortunately this is what they said 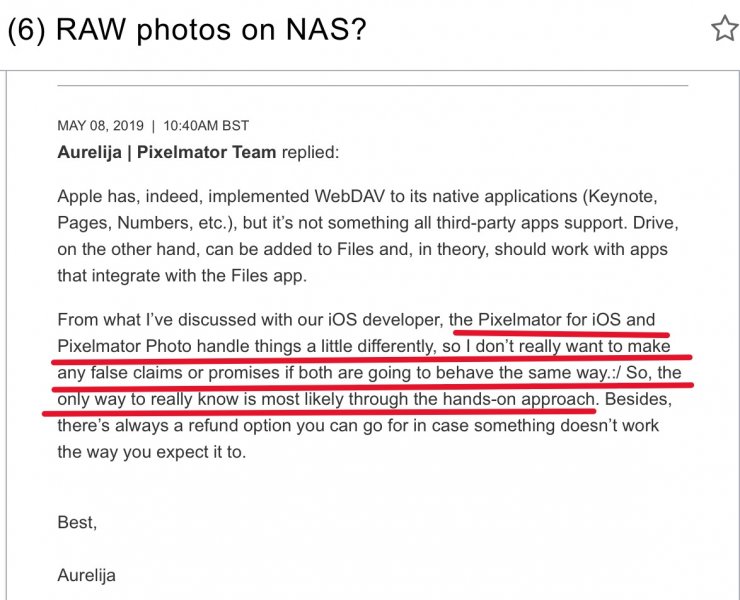 Don’t trouble yourself. I’ll buy the darn thing and try it later when I’m back.

You'd think they could give a few screenshots or even a description (similar to what I did), they don't need to use Drive but at least the iOS File app and API in general.

It's probably not as limited as older apps, and those that get updated but not with Files API, that use explicit links to cloud services and thereby have limited storage options.

In case this interests anyone (a very remote chance I presume).
I've purchased Pixelmator photo and installed Drive.

It's not what I hoped for (not Drive's fault), but it's not too bad. Pixelmator photo might need a DAM to manage a library of photos (not available at the moment).
I can load RAW files from "My Drive" and edit them. However, I was hoping that the changes will be saved back to the NAS directly. Not the case. I have to use Pixelmator’s photo export option to save the edited file back to the NAS via Drive's interface.

The result is that I'll always end up with the edited photo saved on my iPad too (I must delete every time I'm done with my photo edits).

I guess it's ok if I'm editing a few photos at a time. I’ll see how it goes when I load a new batch of RAW photos.
I’m also hoping that the recent announcement of iPadOS will open up more possibilities soon.

19. Dec 2022
TOULO_31
T
V
DSM 6.2 Are #recycle bin contents deletable in Synology Drive Team folders on NAS?
OK, thanks for your help! Deletion from NAS #recycle even if in a Team Folder seems to only affect...

9. Dec 2022
vaalexm
V
S
Need Urgent Help - Drive Corrupting all files
Like the above person commented this is also partly on me for not testing this workflow out before using...

8. Dec 2022
smash
S
A
Synology Drive User Logs
Hello, Probably this has been tackled many times but i do have trouble to find the user logs of the...

5. Dec 2022
AAAA
A
S
DSM 7.1 Revert „home“ as Drive root, back to „Drive“ folder
By default I believe drive will not create the drive folder anymore, as the default drive folder where...