What's the cheapest thing I can get to attach to an old TV's HDMI port to allow DS Video to stream to the TV?

I still want to maintain the experience of using DS Video (on an iPad or an iPhone) to look at the movies catalog and play them to the TV. I don't want the device to do more than that.

I see things like Ruku and Amazon's Fire Stick. Will those work, allowing me to browse the DS Video catalog on iOS (not through the device's interface) and playing the movie all from there?
(Don't want the google thingy please)

Thanks for any thoughts

DS video is Airplay compatible according to Synology, so any device having airplay support should work. If it were me, I'd opt for an Apple TV (older models). Roku should be getting Airplay support, Amazon Fire stick already has it through 3rd party app.

Have not used any of them, so no 1st hand expirience here, sorry. I tend to stick with one brand as much as I can.

So I should be focusing on Airplay devices then. I thought DLNA devices should work too (Maybe not via DS Video interface. Don’t know).

No airplay support for Ruku. Too bad, I was looking at that specifically.

ATV would be nice. Already using the 4K. I like it a lot, I just hate the remote controller. But I don’t want to spend that much for DS Video only. You brought up an interesting suggestion. If I can find an old “new” one, it could be reasonably priced. Not too keen on old “used”.

So fire stick can support airplay through an app. I’ll try to read about it.

I found this one. Says it supports airplay and “3 steps to enjoy yourself on large screen”. I don’t think that’s what I have in mind

You gave me something to work on. Thanks @Daddo

How To Add AirPlay To $39 Amazon Fire TV Stick Dongle.

Let’s see if anyone tried this.

I quote from the comments on your link:

"Horrible. Whoever wrote this article was getting paid by the developer. It is just horrible that people are allowed to post things like this on the Internet, how do you sleep at night?? It would not support airplay at all, I have an iPad 4th gen and an iPhone 6. This app is complete crap and I'm going to do whatever it takes to get a refund. It supports screen mirroring so you can see your home screen or whatever, but as soon as you start playing a video it gives you an error that says "your firmware does not support this application" or something like that… A$$holes. If I could find you, I would kill you, slowly. "

Oh no. This guy is really pissed off. Maybe he should try the “3 steps to enjoy yourself on large screen” device.

So definitely not this one then. Scratch that. Back to the drawing board.

If you are going to look for an older ATV then check Apple TV Technical Specifications for the tech specs.

To act as an Airplay player then I'd suggest the ATV 3rd gen. as it supports 1080p 30fps, unlike 2nd gen. which is 720p. I've the 1st gen. which only gets powered up if the house get cold

2nd gen. was jailbreak-able but not 3rd gen. so there used to be a premium on 2nds. The 4th and 5th gen. (aka HD and 4K) are different things and can have DS Video app added.

I've had each version of ATV, so far, and if you want an Airplay player and something that's links to a local iTunes library too the 3rd gen ATV would be my suggestion. It also has optical audio out so you can use it to stream to an amplifier (unlike the HD and 4K which have just a HDMI output).

Thanks @fredbert. Solid info there. I didn’t know most of this

Have just reconnected my ATV3 and it's getting an update, so seems it's still being maintained unlike the ATV2.

If you want to split out audio from ATV HD or 4K then it needs either: AV amp with HDMI input/output; HDMI switch with audio outputs; HDMI audio splitter box. For getting multi-channel/digital audio split out then the switch/splitter needs to have optical (Toslink) and/or co-axial outputs, generally all will have two channel analogue using either 3.5mm or L/R phono ports.

I’m ok with the audio from the TV speakers. I’m not that sophisticated

This turned out to be harder than I thought!
I was thinking I can use any of those cheap devices, then @Daddo clarified it. It must be AirPlay!

After searching for more devices (and apps) that can do AirPlay, it seems the only sure way is to go with an Apple TV.

But if I have a device that Supports DLNA attached to the TV and the network, wouldn’t that work? Wouldn’t DS Video show it in the remote player menu?
I know that the device can see the DS media with DLNA enabled, but it’s so clunky. I want to to do it the other way around.
I’ve just remembered, I might have such device somewhere. Need to search for it. I’ll try to find it in all the heaps of junk I have
I’ll have an update if I do.

Or –here’s another idea– ditch the old TV and get a smart one for the long haul.

Or Chromecast? Haven't tried it.

DLNA could be a way, haven't tested that either and would need to connect the Blu-ray player to the network to try this out. If you have some old kit then best is to test it.

We have an old TV with no access to aerial, just WiFi. I moved the ATV HD to it and then got the ATV 4K for the main TV. Using the iOS apps means that the old TV gets most of the TV channels plus my one paid sports channel (Eurosport for cycling) and all the home content via DS video or iTunes home sharing. It was probably more expensive to do it this way but it works and I don't want to do tech support every night. 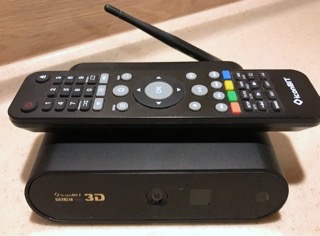 DS Video recognizes it in its remote player menu, I can choose it and play to it. But I can’t control anything from its remote control unit and the only things I can do from DS Video player are stop and play!

On a different note, I have a Sony BRIVIA smart TV and DS Video on my iPad always sees it in its remote player and I can play to it and control the movie from either, the DS Video app or the TV’s remote control unit!

I don’t think it has AirPlay support, because it doesn’t show up on my iPad photos for example (only my ATV 4K shows up as an AirPlay choice).
And it’s not one of those with Android TV os (or whatever it’s called).

I think it’s doing it via DLNA to this Sony TV! Actually it’s really good and plays most movie formats. The only reason I added ATV was for subtitles support when using DS Video.

Note that I don’t have media server running on the DS. I tried running it once and what it did is provided the TV (and the above pictured player) with access to the media files, but the menus were so simple and no thumbnails. Very primitive compared to DS Video. So I stopped the DLNA server. I use DS Video on the ATV most of the time now.

So back to AirPlay or a new TV maybe. This video stuff is not my forte

Not quite sure what your end goal is and what NAS model are you using but here are my toughts so far:

1. DLNA implementation is different from device to device, so recommending one is really tricky.
2. You stated that you want to stream content from your iOS apps, hence my mention of Airplay as a must.

If there is a way to get Plex on your NAS, that could be a way to go (running Plex server on your NAS, Plex client on any supported device - Android or tvOS).

Daddo said:
If there is a way to get Plex on your NAS, that could be a way to go (running Plex server on your NAS, Plex client on any supported device - Android or tvOS).
Click to expand...

That’s interesting. Is there an equivalent to DS Video that runs on my ATV 4K on a cheap Android device?
(I guess that’s easy to find. I’ll check Synology’s website).

I’ll clarify the end goal…
I want to stream video from a DS using Video Station to this old LG TV that has HDMI input. And I want to use an iPad with DS Video to browse the catalog (if that’s what it’s called) and use DS Video’s remote player feature to play the movie on the TV via whatever AirPlay or DLNA device that is connected to the network and to the old LG TV via its HDMI input.

I wish it can be just like what I’ve described above when using the Sony BRAVIA TV.

Sorry guys. I think I’ve given you a headache with this thing. I’ll just tell them (they are my project partners) to buy a new TV.
As I said, it turned out to be much complicated than I thought.

Even the title of the thread is misspelled

WST16 said:
But if I have a device that Supports DLNA attached to the TV and the network, wouldn’t that work?
Click to expand...

With DLNA, you would not need Video Station at all... only Media Server.

Telos said:
With DLNA, you would not need Video Station at all... only Media Server.
Click to expand...

I know. I don’t want that

TBH if you're going to get a new TV just for the streaming capability then it'd be cheaper to get an ATV 4K (or HD), then you'd can:

Sure an ATV 4K is more than the £40/$40/€40 cheapo device you were considering but now you said about buying a new TV.

fredbert said:
TBH if you're going to get a new TV just for the streaming capability then it'd be cheaper to get an ATV 4K (or HD), then you'd can:

Sure an ATV 4K is more than the £40/$40/€40 cheapo device you were considering but now you said about buying a new TV.
Click to expand...

True. Can’t argue with that logic

Z
Video Station - TV Show Episode Metadata (fixing)
It’s annoying but I find there are always cases where it fails to take the hint.

B
DSM 7.0 Video Station not indexing movies at all
Hi all! As an update on this mysterious matter, I can confirm that it has been finally solved. I don't...

8. Jan 2022
belenos
B
Z
Video Station Video Timeline Freezing and SMB Signing
I wanted to share some knowledge I gained trying to troubleshoot some issues I encountered on my 1821+...

24. Nov 2021
zalahmar
Z
S
Video Station don't update metadata automatically TMDB
Ah ok. The .vsmeta file is created when you modify manually the metadata of the video. If present, the...