I have a DS218+ and I've been trying to INCREASE the network speed to the device in my apartment (pre-wired CAT 5E). I was unable to maintain 1gbps on my PC, as network card would automatically downgrade after a while... what I did, ordered some Cat7 shielded cables from Amazon and changed the CAT6 ethernet cable FROM PC to wall ethernet plug and that SOLVED the problem! Like I maintained 1gbps on my network card for days now without any issues. Now, I can reach upto 600mbps (very short bursts) while transfering files.

Why could this be? That my PC and Synology act totally different, one benefits, the other doesn't?! Am I doing something wrong?! I assume the new CAT7 cable is faster and has more shielding, so WHY it's recognized as 100mbps by Synology (or router)?

That’s strange. However, for testing, can you move the Synology with the new cable to connect it directly to the switch?
As I understand it, you have no control over the cabling in your home (5E) and you can only change the end points. It could be that having the new cables at both ends is “overwhelming” the wiring for some reason to the point where the devices decide to drop down to 100. Although 5E should handle 1Gb fine.

Try moving the devices to a different home wire (different wall sockets) and see if anything changes.

What I’d also do, is check the wiring map on the wall cable to make sure it’s correct. You’ll need a device for that (they can be very cheap to very expensive), but you can try to borrow one from your work if they have them.
Sometimes when (if) the network cabling is done by electricians, they don’t map them correctly and do a straight wire.
A

Yeah, quite strange. Maybe this weekend I will do some more testing. It makes no sense.

Something like this maybe. I'm not sure of what wires I have going through the walls, but they did a good job

Ok, so just ran the same test with old cable and I got this... which means it's as good as it gets!

I suggest checking your wiring for the Cat7. I had a problem with my Cat5 and found that I had broken a wire when wiring a wall socket. A simple cheap continuity tester similar to the device below diagnosed problem rapidly. 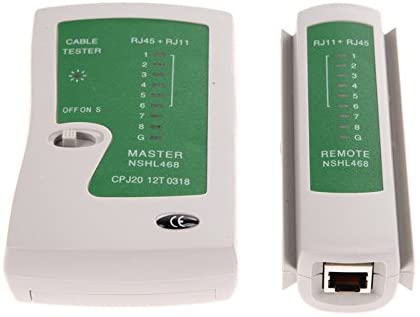 ab997 said:
Ok, so just ran the same test with old cable and I got this... which means it's as good as it gets!
Click to expand...

Last edited: 8. Dec 2021
I have a led cable tester and the cables passed that, yet still had issues with New Cat 6 cables falling back to 100MB speeds consistently.
I bought a small net gear managed switch, with a built in cable test routine, and it indicated that all my new eBay CAT6 cables had “Impedance Mismatch” failures, though they passed the led tester.
A couple older CAT6 cables, though longer passed, so tried them! Success!
Ended up testing all cables — ending up re-purchasing many new cables: Monoprice, and they passed. I had one more shipment from eBay and when they arrived they ALL failed as well (same error) so were refused and sent back. Others were cut and pitched. 4 of the remaining EBay cables had already been run in pvc piping outside for POE 100MB cameras — They remain, and work ok at 100MB, but have been flagged as: ‘100MB use Only’. That was 2 years ago, and went from many different speed problems that came & went — to 100% Solid GB Operation.
Apparently there is a lot of poor cable being passed off as CAT6 cable. I learned my lesson the hard way: buy Cable from trusted sources!
That inexpensive Netgear managed switch was worth far more tha the $12 I paid for it!

Managed switch for $12! Where did you find that?

Oh cool, I actually have the GS105! but it's the unmanaged version, should I upgrade and get the managed one?! Mine has lights that light up per cable speed. For instance, a Cat 5E only light up as 100mbps that I threw out, BUT the one cable in question lights up Green, meaning it's 1gbps.

Last edited: 8. Dec 2021
Some of eBay cables went back and forth between 1000 & 100….. making me think other devices were bad,instead of cables: Cables are new and made by professionals, right???? This went on for months because I didn’t realize an led tester is not sufficient to determine cable quality.
Obviously I didn’t want to spend $800 for a dedicated cable tester, but seeing how the led tester passed bad cables, I had to come up with plan B, and this managed switch’s cable test routine was helpful.
I tested all cables I own, and nothing is used without first testing & Passing via that device. During the Test & Purge, I Pitched about 10 cables that failed. All that failed reported as: Impedance Mis-Match, yet passed LED Tester.

Although there a different types of LED tester, most if not all are just doing a basic continuity test at DC and not at high frequency.
A

NSquirrel said:
Although there a different types of LED tester, most if not all are just doing a basic continuity test at DC and not at high frequency.
Click to expand...

So, only a managed switch would be able to do a proper test? I also have a TP-link switch (unmanaged), which has a cable test feature.

I would have thought that a good start towards a proper test would be to use something like the Totusoft LAN speed test (Windows) application. This will test speed of the path between a computer to the NAS.

File station on new DS218
I thought that might be the case. I was able to get it to work (identifying individual disk locations) on...