Maybe I'm missing something basic. On the RT2600 and/or MR2200ac, is there no way to associate ethernet ports/connections with the guest network rather than the main network?

That is: I have two wireless networks running on my Synology routers - the main one, and the guest. The guest does not have access to other LAN resources. I would like to use one of the ethernet ports (on the 2600 or a 2200, I don't care which) so that hardwired devices connected to it will be on the guest, rather than main, network. (So that devices connected there will have addresses in the same range as the wireless network - 192.168.2.X, rather than in the range used by the main network, 10.86.173.X.)

Is that not possible?

The wireless network can support 'internal' and guest WLANs because the connections are supported by the hardware and that hardware is exclusively running Synology SRM. To have a guest LAN would require either

I have no need for supporting two separate local subnets that is mediated by the SRM router, but it's probable that adding routing in SRM and editing network files by hand will add support for two networks, but you'll need switches that support VLANs, at minimum.

BTW my recent tests on the MR2200ac was that the LAN port only works when the WAN port is connected: LAN port connection doesn't bridge to WLAN backhaul.

Thinking about it, and haven't tested it so may not work...

I have my ISP router setup in bridge/modem mode so that it does nothing more than present the Internet IP on the RT2600ac. There is a virtual, private DMZ that is between the WAN port of the RT and the LAN port of the router, the erstwhile internal LAN that the router would provide. This enables me to access the router's config interface. Anyway, I digress.

Now, if I switch the ISP router back into router mode then its internal LAN ports can be used as a private DMZ and one connection will be too the RT2600ac WAN port. Disabling SRM's NAT will mean there's no double-NAT (might be useful). The RT will protect the true internal LAN using its outward facing firewall, and it can do internal and guest WLAN. Any devices connected to the remaining ISP router LAN ports will be on the 'guest LAN', and they are blocked from the local access unless the RT's firewall has rules to allow it.

In this case the security hole that many ISP routers offer, 'DMZ', could be used to direct traffic to the internal RT's WAN IP. The DMZ feature is where any inbound traffic that isn't handled by the ISP router's NAT and firewall rules will be forwarded to the IP specified in the DMZ configuration

Fredbert, I figured as much. I was hoping against all odds that there was some setting I had missed. It wouldn't be completely out of the question as other mesh systems (like Open-Mesh) offer multiple simultaneous SSIDs and allow you to choose which SSID's range the LAN port on the units will be associated with. From my perspective, it's a feature deficit on the Synology system. 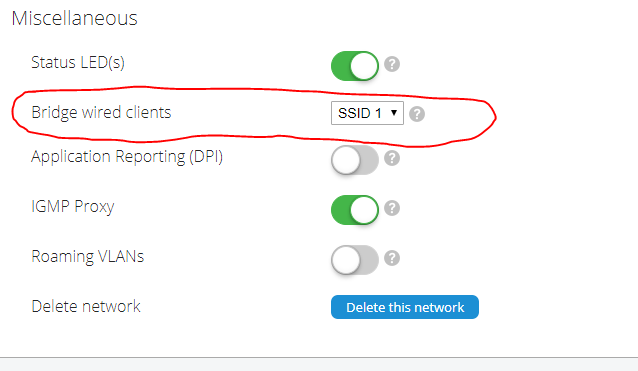 “dynamic networking” - this feature has been one of main in my decision to choose Ubiquiti, to isolate single or more port from another by port operation profiles (for wired or wireless networks).
Btw: Ubiquiti USG Pro is for same price as RT2600ac
then usage of pair: router+switch from same vendor has the added value, include third layer: AP.
Synology (now) has good drive to “single or All in one” layer network topology architecture, good job. No doubt. But sometime it’s not enough.

fredbert said:
BTW my recent tests on the MR2200ac was that the LAN port only works when the WAN port is connected: LAN port connection doesn't bridge to WLAN backhaul.
Click to expand...

I need to correct my previous statement on MR2200ac LAN/WAN port to wireless backhaul. I originally posted this recently in another thread (have repeated this update there) and it still seemed odd that the wired port wouldn't bridge over the wireless backhaul.

I've now had more time to redo the test and ensure that the Auto backhaul setting has settled down after pulling the backhaul ethernet cable from the MR2200ac. It took quite some time for the MR and RT to complete the switch from wired to wireless backhaul. So here's the new result:

Connecting a local device to the ethernet ports of the MR works like this:

I'd still recommend a wired uplink between the devices because even what I thought was a short distance through an uncomplicated ceiling/floor caused the >900Mbps link to drop to ~200Mbps.

Fresher, thanks for taking the time to update!
This seems to suggest that there’s no difference between the functions of the “WAN” and “LAN” ports when the MR is not being used as a router, which makes sense.
R

It is possible to extend the "Guest Network" to your LAN. Not to go into a long conversation about what a VLAN is or is not. I stumbled into the solution after reading this point about the WiFi Point.

Here are the steps:

Configure the switch port that connects to the RT2600AC router with the following commands:
Pretty simple to accomplish and the switch config may be different for your switch.
P

Rustyduck - it's perfect and understandable. Could you please add how should be configured ports between switches if I have more then one switch? Thank you very much.

Punch a hole from specific devices on guest network to device on home network?
On the RT2600, I use the regular network 10.86.173.X for most of my devices, including my NAS units, and...

SRM, Guest Wireless and PiHole
You can try adding routing from the Guest WiFi subnet to just the PiHole but I don't know if SRM would...

RT2600ac 2nd 2.4GHz Wifi Network
Hi, I'm trying to fault find why my Amazon Echos flake out when playing in a speaker group, they cut out...

RT2600ac Devices Not Listed in Network Center
I’ve been complaining about this for years. My feelings is: When you ask for a list devices, YOU LIST ALL...

Segmenting my IoT & Alexa Devices from my Main Network - How do you Test for Blocked Access?
Jan... I completed moving all my IoT devices over to the segmented Network, and reinstalled Threat...