I am thinking about to replace one HDD( No.1) with SSD, does it make sense? any complication?

Benefits I would expect is noise reduction/ speed, but has concerns if incompatibility on speed chock or jam?

3. The priority list is base of a decision. Disk noise is a “nice to have” in NAS environment. Speed of course, but for what:

Result:
there is no rational reason, for your model, but don’t hesitate, it is up to you.

Well I will convert my 718 and 918 to all SSD in the coming months. They will run DSM, plex, some docker container (most will be on RS models) and some VMs. Expecting a solid speed bump so looking forward to it. Also They will both be running on 2G with RS running on 4G ethernet. Playtime is coming .

@iStone - running 412 myself as well. If thats your main and only NAS I would say go for it. Mine is running 4GB of ram and If I didnt need that much storage on it I would change it to SSD for sure.

about interface, sure i will use the compatible as HDD , which is SATA. 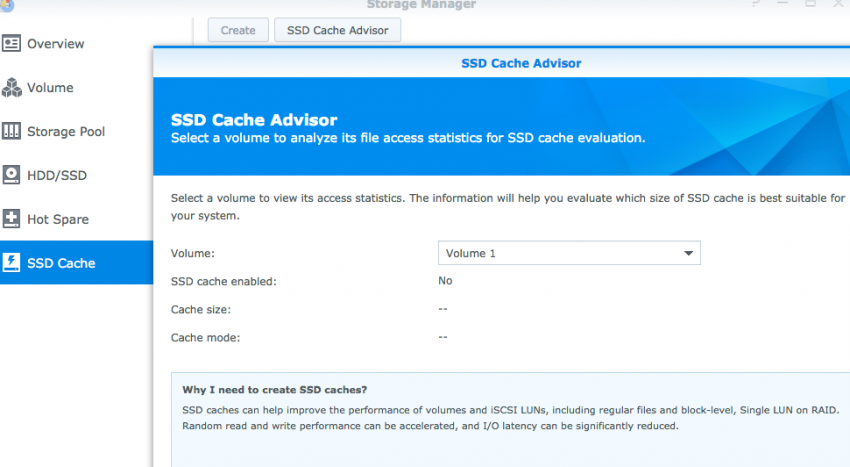 So - step by step from theory point of view:
1. it doesn't matter what kind of RAID you will use (RAID or Syno SHR) - but if you will mix the RAID by different disks (from performance point of view), your RAID will perform at maximum of the slower disk (physics). There is purposely not mentioned a capacity of the disk. Just performance. Example: for each write or read operation you need to wait for a cooperation of each disks, then you will be braked by the slowest performance. If you have mixed HDD and SSD environment, your bottleneck (performance) is primary the HDD. Then purchase single SSD to pure HDD RAID enviro is not good idea.

2. Do you have in your NAS right now setup of SHR or SHR2?
There is big difference. SHR is RAID1 based and SHR2 is not RAID5.

3. SSD cache is great, but not for home usage (media center, family non-frequent data sync). And it great with M.2, but your NAS can't do it.

Agree with @jeyare on all counts.

@jeyare:
agree with you that the overall performance depends on the worst performer in the chain. very sad on this. But that's theory, I haven't seen any experience report.

( By the way, this comes again to my post on Synology NAS deficits claims. i.e. No reliable benchmark tools to evaluate NAS(w.r.t. RAM, HDD types, SSD, Ethernet, Apps installed, etc.) It would be nice to have a across platform/series/model comparison, esp. for RAM/HDD/SSD upgrade, or mixed.)

I researched a bit also on SSD cache feature. In its principal, yes, i would have to admit, almost useless for small user (no intensive heavy data in/out transactions on multiple users base).

Overall, it is very disappointing that the Synology hasn't/don't want to make better use of the NAS case. One option I would think about is the SSD cache:
Off-topic, is there a software solution Link -Aggregation, using both Gigabit LANs, i.e. software emulator? ( not using extra CISCO switcher)

re RAID theory (mixed HDD/SSD):
It is not about a theory, it is about basic principle of physics rules by Newton (1687). Then there is not need a proof.

re mentioned SSD cache for network transport (not for the NAS Server operation):
- single 1G NIC. There is no business. Single 1G NIC can provide max. 1024Mbps (theoreticall speed), in real operation 200-800Mbps (up to all conditions). Common HDD max. 120MBps=960Mbps, just to be sure common SSD is about 3200Mbps. What needs to be cached by additional SSD for such network transport?
For two and more NICs - it is different point of view only when you have LAG environment end to end. If no, then same as for 1NIC.

re 1,5TB SSD split between the cache and RAID. You have to write this idea to all storage solution vendors, but I can imagine what they will write you back .

re LAG:
Better performance (native full LAG support, LACP is part of them) is joined with more expensive devices than for mass market. Same as for Prius vs Nissan GT-R.
Btw, Ubiquity US48p switch you can get for a price of two pro-HDD.

re LACP sw network switch emulator- doesn’t exist, because it is about network layer environment. Except emulators for a testing of network performance.

...and LACP doesn't provide a single client any bandwidth uplift, it just provides multiple clients with a full gigabit connection. (eg: 2x1GbE, not 1x2GbE). You'd need to go 10GbE to get around this.

D
Hdd compatible one one Synology unit but not another?
It's mainly a factor of 'untested'. I think I have nothing but unsupported drives running in all my...

22. Feb 2022
Samir
S
B
DS1511+ Motherboard defect. HDD to SWAP to other Syno compatible
Unless you see that the supported model you want to upgrade to locked down to Syno branded drives, I'd...

C
DS1815+ ; new HDD getting plugged out while repairing
Looks like the problem is either the drive or the sata port for that bay. No way but to test with another...

D
HDD Compatibility ?
Thanks, 41 hours ? Glad i only installed 3TB now ! lol, now got that sorted, next is linking one of my...