I have a Hyper Backup to a Local Storage USB. I run it nightly and I want to it to rotate but not keep far too many versions of my files. I'm using Smart Recycle and as the 8TB drive was filling up it became clear 256 versions was madness. So I set it to 12 versions, which is more than enough, but I couldn't run the backup for a week or so - I assume while it cleaned out the excess versions. But still the drive is near 90% capacity so I've dropped versions down to 5 which seems plenty for me. Still the drive is at 90%.

And now when I look at the Version List there are only six entries and the Backup Explorer only goes back six days.

This is not how I read and understand the settings. I haven't touched most of the files being backed up and there will only be a single backup version of those. So there must be a copy of 'firstfile.txt' backed up six moths ago. But I'm not able to go back six months to see if that file exists.

Clearly this is a combination of poor documentation / translation and my comprehension skills. Who can explain what's happening?

What I do have and understand is ChronoSync running backups on my Macs. It 'archives' and keeps three versions of files which have changed or been deleted and hangs on to them for a year (my settings). So I can easily find 'firstfile.txt' from six months ago and if that's the wrong version go back to last year. I thought I had Hyper Backup set to do the same...

Here is my rotation schedule for a daily task (personally I think that one year of versions, with compression, should be enough)... 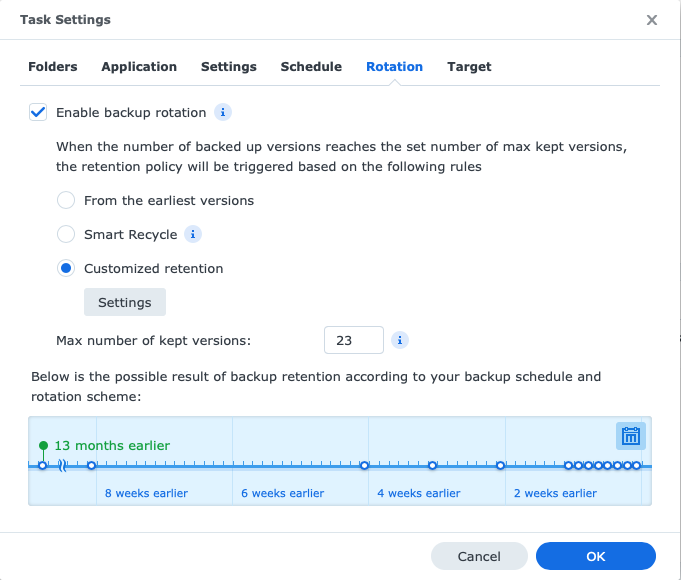 With customised retention of: 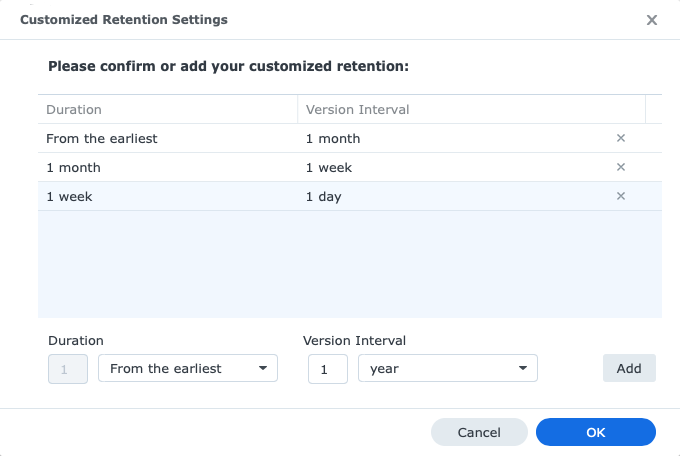 You might have to go into the task's backup history and delete some older version points.

fredbert said:
Here is my rotation schedule for a daily task
Click to expand...

Thanks, quick question while I digest that. Why 23 kept versions? How / why did you come up with that number. As I say, I have ChronoSync keep three versions. 23 seems either a random number or there's a Very Good Reason for it!

It’s basically trying to keep:
Though day 7 maybe considered week 1, and week 4 might be month 1. So could lose a few versions. Anyway it’s what I decide was more than enough. If I start to run out of space then I will trim it.

I can go back to each day for the last week, each end of the week for last month and each last day of the month this year.
Deduplication saves storage space.

sorry for the double information was typing during Fredberts post

Backup 1 day a week, 17 versions & 12 weeks. I have 3 instances of this running across 3 NASes, on different days, so effectively 3 backups a week. I'd set my backups to run once every 2 weeks if I could. 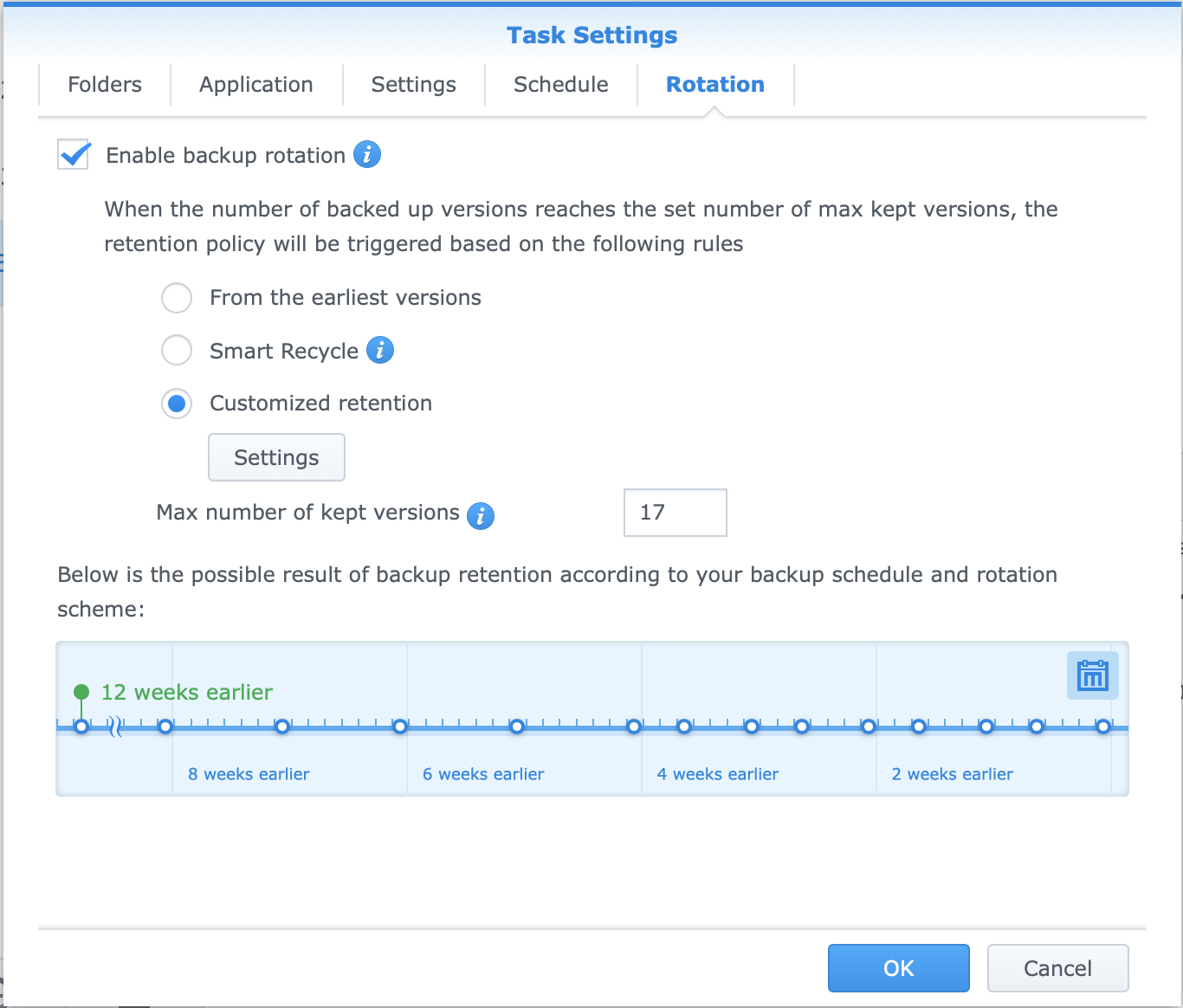 While I still try and get my head around versions and rotations I'm doing a check of what I'm backing up and how much space I'm using.

So how do I get DSM to tell me how much space a directory is using (GUI please!). I'm backing up 'homes' to my USB drive. Control Panel -> Shared Folder tells me its a 1.7 TB directory. How can I find the size of the individual directories for each users' home? File Station only shows me the size of documents, not directories.

Have you used Storage Analyzer?

fredbert said:
Have you used Storage Analyzer?
Click to expand...

Downloading and going through the wizard. Thanks for that.

G
Hyper Backup - Source selection
Many thanks for your detailed answer and screenshots !!! That confirms what I assumed. I'll report this to...

S
Hyper Backup after Power Failure & Reassigned IP address
Hey guys, Just an update. I raised a support ticket with synology and they applied an update, they did...

16. Jul 2021
luckybro27
L
B
Hyper backup stopped working
DOH!! YOU ARE CORRECT.. I had concentrated on the port forwarding on the source side and had not checked...