User article Panic around the hard drive. Or just well thought out marketing (from/for whom)? Part No. 2

Currently reading
User article Panic around the hard drive. Or just well thought out marketing (from/for whom)? Part No. 2

In 2013, Seagate introduced shingled magnetic recording (SMR) as the next generation of PMR based data recording. Since then Conventional magnetic recording (CMR) was used for preliminary PMR technology and SMR for second generation of PMR. Then Both CMR & SMR are PMR (based on the orientation of magnets in platter). When you see “PMR only” in the description of an HDD, you can’t distinguish whether the disk has CMR or SMR. And vendors hide such information. Why, if SMR is better? Better for whom?

“With SMR technology, Seagate is on track to improve areal density by up to 25 percent or 1.25TB per disk, delivering hard drives with the lowest cost per gigabyte and reaching capacities of 5TB and beyond.” said Mark Re, Seagate’s chief technology officer. And there was also announced that – „Importantly, SMR can improve reliability by allowing Seagate to use fewer heads and disks to achieve new capacity points. SMR also provides a better value by increasing storage capacity while utilizing the same disk and heads as drive configurations shipping today thereby, providing a more cost-effective approach to increasing aerial density.“

Just remember the relation of the vendor costs and the number of platters in HDD. See that point in SMR? Who is the winner?

Where is the problem then?

Some simplification is needed, for better understanding, so I will use an example based on highway traffic (next three pictures sourced from xin.at):

1. CMR technology is based on enough width (guard space) of highway lanes (disk capacity), then cars can 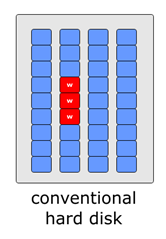 securely drive with defined speed and direction, without additional complicated regulations. Reason why CMR can’t provide more highway lanes in the closed environment of a 3.5” HDD form factor = they need more patterns, but they can’t change the dimensions of the HDD box. There are just three possible solutions to it:
2. SMR technology is based on really short (tiny) highway lane-width, without the guaranteed space for a car 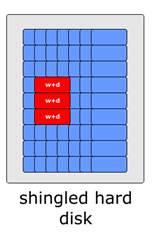 within a single lane. That is risky, but achievable for really low traffic (low workload). However in regular traffic (when all the lanes are almost full) you need to regulate all cars separately in these lanes to achieve movement for all cars = reason for the existence of DMSMR (device managed SMR = HDD firmware-controlled). The append-only highway lanes (platter‘s zones) are very slow for random writing, so writes are first sent to a cache, and the disk moves this data to SMR parts when idle. And the term „when idle“ is a problem for all who use the HDD with a workload of >180TB/yearly (explained below) . Finally, you have achieved a model of more highway lanes (SMR), but a really slow movement of cars vs the normal highway (CMR). This model has additional advantage for vendors = less patterns. And less platters = less cost for vendors.

Back to disk technology terms - SMR must overwrite adjacent magnetic tracks and then rewrite them. That’s the reason why they’re so slow and why they need a bigger cache for such operations. 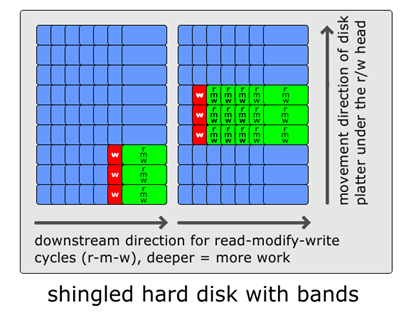 An additional problem for NAS users is native Zoned device suppor (ZBC/ZAC commands layer for the SMR) for etx4 file system = doesn’t exist for the DMSMR, as far as I know. Thusly the SMR disk can‘t beat CMR speed with etx4. Even using an SSD cache in your NAS can‘t help you with such a basic issue. Some real tests have confirmed such problems during rsync from the SMR drive, especially if the filesystem wasn‘t mounted read-only with the noatime option. Such test confirms that an SMR drive needs to write a timestamp for each file rsync read, resulting in a significant performance degradation from around 80 MB/s down to 3-5 MB/s plus annoying head wear / clicking noise. Different story is for BTRFS, which nativelly supports a Zoned device (SMR), but you have to purchase an HDD with HMSMR (host managed SMR). If you’re operating a system with BTRFS, you should specifically consider purchasing such HDDs. That way you can get better performance. If you’ve already purchased a disk with DMSMR, you might be sorely dissapointed.

From all the mentioned SMR features I would summarize these points:
But vendors have prepared a „better“ recommendation for us, regarding when these SMR HDDs are useful for us and when not. Their recommendation is based on 180TB/yearly workloads in the HDD. First, it seems like magic, because every single vendor uses the same threshold = 180TB/yearly. Or is it a kind of mutual recommendation from all the vendors to us? I feel some kind of strange precedents here, when each independent vendor has the exact same operation conditions.

So let’s understand how the independence of HDD R&D functions:
Now’s the time to understand, what the 180TB/year workload threshold means

Simple check using a standard situation:
We will utilize an HDD for just 2 hours/daily with backup between two NASes with the average speed of data throughput 70MB/sec (which isn’t perfect speed on a Gigabit network).

Then we can calculate the total amount of data transported between the NASes (disk groups):
70MB/sec x 2hours = 0,6TB/day x 365 days = 221 TB/year .... which is +23% over the 180TB/year threshold for the SMR disk. Then, following this simple check, the operation model is out for the SMR disk.

We still haven’t mentioned RAID operations and RAID factor penalties for the write operation, when you need to define your yearly workload based on a simple IOPS measurement. Then 180TB/year workload is out of any NAS enthusiast’s group operation model.

SMR with DMSMR is great technology for all NAS owner, when they use such HDD(s) or groups isolated for a specific purpose, e.g. media center source. In this case heavy workload for written operation isn’t expected. When the read throughput for TV is about 60Mbps = 7.5MB/s. Or for a photo library. With such operation model you will hardly reach 180TB/y and you will be happy with the price per TB.

SMR DMSMR isn’t useful for others who need to utilize their disk more than 2hour daily with the average write speed of about 70MB/sec, because you might experience significant speed decrease. There aren’t enough reviews or tests for BTRFS and SMR disks with HMSMR, which would confirm they are better in such conditions. Obviously, you need CMR disks for all virtualization platforms, cloud platforms or heavy backup operations in your NASes, what was an enabler of NAS purchases in last few years. Never use a mixed RAID disk group with CMR and SMR disks. Ever.

When you’re looking for a new HDD, try to compare the number of platters in the watched disks, then if one has SMR technology described and another has the same disk platters, even same capacity, there is a 99,9999% chance, that both of them use the same technology. Yes, it’s complicated, but useful until vendors start clearly disclosing that information.

I really don’t know if the 3 vendors have any mutual agreements about the “SMR disclosure” in their Disk data sheets, I don’t really care, but it seems to be, that their R&D doesn’t care about the NAS development, especially when they create NAS HDDs. And this is a strong message for the customer’s wallet. But I think, they need to take responsibility for such a managed chaos. I have some recommendations:
Protect your purchasing rights!
Click to expand...

problem of the usage of the SMR in complicated RAID structures as for RAID6 or RAID10 in Syno NASes, that there isn’t pure Btrfs RAID, but a hybrid split between LVM and Btrfs and Device managed SMR at the disk side.
What is in opposite side with a Host managed SMR - far away from the Syno setup. Then there is a big chance of stuck of data within - what isn’t primary problem of the SMR technology, but used architecture workflow.

this is another possible reason for an existence of the Syno branded disk drives - hiding of Syno NAS RAID Achilles tendon. Makes a sense.
They don’t need solve the reason, just cover it by nice story.