User article Panic around the SMR HDDs. Or just well thought out marketing (from/for whom)? Part No.1 (2)

Currently reading
User article Panic around the SMR HDDs. Or just well thought out marketing (from/for whom)? Part No.1 (2) 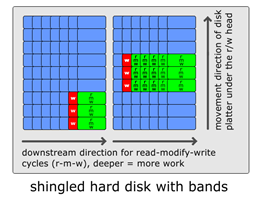 It looks like in April 2020, a specific topic regarding HDDs has become the talk of the town for many forums. The base for this topic are three mysterious letters or rather an acronym called „SMR“ - Shingled magnetic recording. The craze about SMR took such an interesting direction, that it even influenced the people who, in the past, would only look at the price of an HDD as a purchasing condition. Today it seems that the most important question when someone is buying HDD is whether the disc is SMR or not (or thousands derivates of the question based on the SMR sign). Without any deep knowledge of what SMR means at all. „SMR is bad“ - if they see such wording anywhere, it’s done, for many of them. So let's break it down in completely different way than others do. Because we are different in this forum. I will not go into the deep description for experts. I will focus on the largest group of disk users, which I will divide into:

For clarity – Experts in my opinion, are really the smallest group compared to both previous. Here belong the people who understand the principles of each part of the HDD. They may have even disassembled a few discs and successfully put them back together. Of course, using only a Swiss knife, like MacGyver did in the 80‘.

A few basics, necessary to understand why the SMR technology was invented 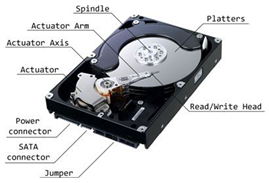 The HDD is one of older parts of computer devices which, in an almost unchanged purpose and form, has survived to the present day. Based on similar main parts: magnetic platters, arms with read/write heads, spindle and electromotor for the platter movement, enclosure. The heads float a microscopic height above the platter surface. It’s amazing that in such a small environment that it is affected by all of the Newton’s laws we can store our data (sometimes very valuable data). Try to imagine that over past 60 years, manufacturers have found nothing more usable and durable for storing data than HDDs. Is it a miracle or a curse? I’ve heard many times, especially from “wise” consultants, that the era of HDDs is at its end. But yet they are still here. And the consultants change their predictions every year, of course. 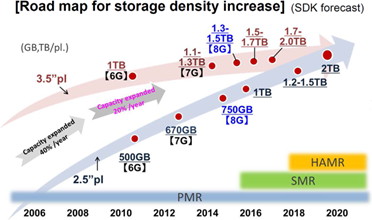 Since 1983 we have seen a strong race for Areal density = RAW capacity per square inch of the platters in the HDD. This RAW capacity has a direct relation to net storage capacity of the HDD (storage capacity is always smaller than the RAW, based on many factors). Density also generally affects the performance. Just imagine in 1953 the Areal density was just 2 000 bit/in2. Since then, the increase in density has matched Moore's Law in 2014, reaching 1 Tbit/in2. In 2015, Seagate introduced a hard drive with a density of 1.34 Tbit/in2. New technologies like HAMR from Seagate expect up to 5 Tbit/in2.

How the Areal density impacts the price of the HDD?

In the case of disk-based media, the primary cost is based on the cost of moving parts inside the drive (platters, arms, arms array, motor, ...). This sets a fixed lower limit, which answers - why the average selling price for both of the major HDD manufacturers has remained US$45–75 since 2007. That said, the price of high-capacity drives has fallen rapidly, and this is indeed an effect of density. The highest capacity drives use more platters, essentially individual hard drives within one case. It was valid until 2015, when SMR technology was introduced commercially. As the density increases, the number of platters can be reduced by the SMR technology, leading to lower costs.

I don't know that panic pertains- rather anger at the fact that WD is cutting corners to make a cheaper drive using technology that is not meant for RAID environments, selling it at the same price as the CMR reds and labeling it as a NAS drive AND selling them at the same price as the CMR Red. There is real concern of the complication that arrays using these drives won't properly rebuild.

I spent a time with googling around Internet and people are crazy. There is a solution, but need to read also Part No. 2

User article Panic around the hard drive. Or just well thought out marketing (from/for whom)? Part No. 2
Seagate: More here...
2