Last edited: 23. Nov 2022
I am trying to move from running Sonarr, Radarr and SBnzd as separate community packages, to running them in docker. So far, I have radarr running in docker, and it's working fine. It is calling the SABnzd that is running as a package, and it's downloading movies, and moving them into Plex just fine. However, Sonarr is not able to do the same. I am getting this permissions issue:

2022-11-23 16:42:22.5|Error|DownloadedEpisodesImportService|Import failed, path does not exist or is not accessible by Sonarr: /volume1/downloads/complete/Wednesday.S01E01.1080p.HEVC.x265-MeGusta/. Ensure the path exists and the user running Sonarr has the correct permissions to access this file/folder


The odd thing is, the permissions for /volume1/downloads show that the docker-user has full control, as I set it. (that is the user running Sonarr, right?)
And I even have SABnzd set to make completed downloads permissions have a 777 permissions (just in case).

So I'm curious as to why radarr doesn't have an issue downloading using that SABnzd, yet Sonarr does. I have double checked, and I have the exact same settings for "Download client" on both radarr and sonarr.

So I'm missing something obvious, probably in my Sonarr config. But what? I don't want to change my SABnzd config, until I know that I have Sonarr and Radarr running fine, using the docker container. That way, if I have issues running SABnzd as a docker container, I can fall back to using the community package, until I resolve the issue, because I know that works.

I do have the "Remote Path Mappings" set to point to the existing structure. 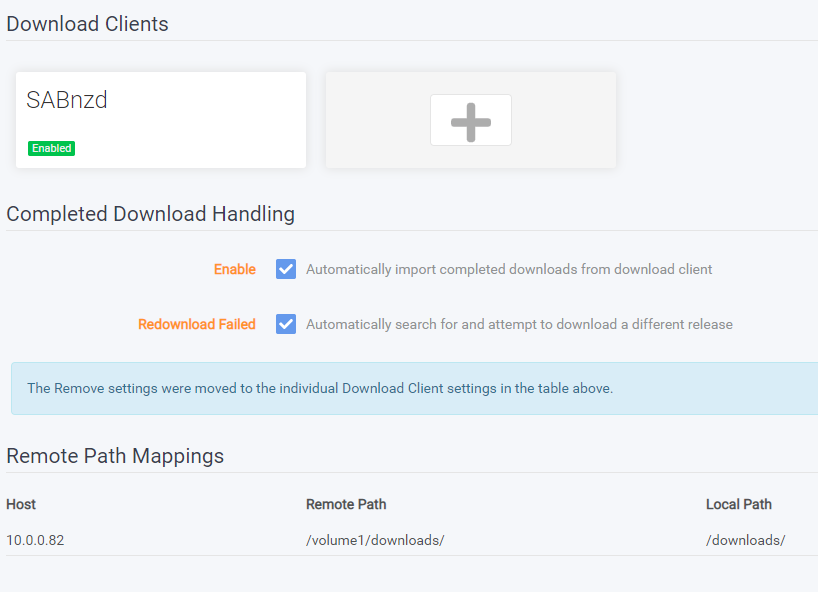 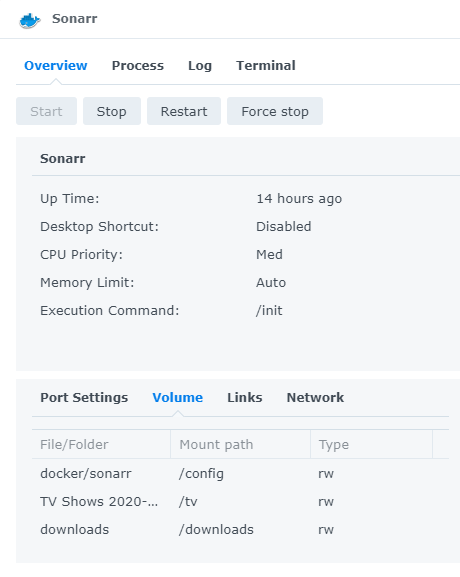 Sort by date Sort by votes

I am running nzbget and sonarr as container.

Since both containers use the same path for the complete folder, it was not required configuring any remote path mappings at all.
Upvote 0

An update: I tried running SABnzbd as a container, following this guide 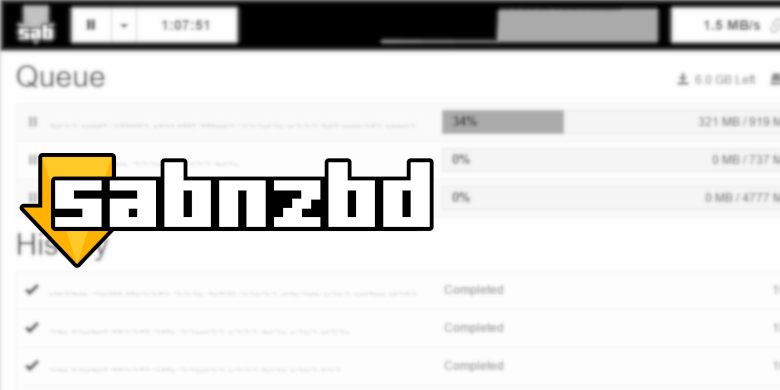 SABnzbd in Docker on a Synology NAS

In this guide I will be taking you through the steps to download and setup SABnzbd in Docker on a Synology NAS.

And after changing the Sonarr download client to point to this instance of SABnzbd (I told it to use a local port of 8088, so it wouldn't interfere with the working port 8080 of the community package version). And once I followed all the details (making a new path for SABnzbd to use, and now removing the "Remote Path Mappings" (which I won't need, if all the programs are running in containers in the same host, under the same structure).

And now it worked! (well, I had to create the folder for the show on my own, but I will work on that next)

So now I can change Radarr download client to be the same, and I can stop using the community packages all together, and not have to worry that upgrading one will break the others (such as when SABnzbd got upgraded last year, and had that certificates problem).

MikeLeone said:
So now I can change Radarr download client to be the same, and I can stop using the community packages
Click to expand...

Another Docker permissions question?
Brilliant, thanks again (y) 1638624696 It's working fine now, thanks very much for your help (y)

1
Docker permissions - how and where?
Yes I did... just a typo in the post Not sure what you are looking for... the container itself doesnt...

Question Permissions for User to run Docker?
@one-eyed-king , I have tried your first step: sudo synogroup --add docker and encounter the following...

Question Docker Permissions Question
OK... That seemed to work when I changed the group from user to administrators (while using an...

O
Issues using Dozzle behind the built in reverse proxy
Configure the second reverse to run on a custom port, just so you can port forward from a custom port to...

Info DSM 7 RC | CalDAV/DAVx⁵ Sync Issues
In the event your CalDAV syncing via DAVx⁵ has failed with DSM 7 RC, a workaround is to set the TLS/SSL...

B
Webstation stops exposing running docker container ports
Sure, thanks for the tip, apparently it can workaround the Web Station bug although I wonder how this...