Just tried DS Photo and Photostation and it looks good. Problem is it only wants to save to a specific folder called "Photo" on the NAS. I am using Synology drive to sync all my photos from my pc but it wont let me store those photos in the same folder that photo station uses. How can i link these two?
Thanks

Moments package and mobile apps? There'll be a harmonisation of Photo Station and Moments in DSM 7: Synology Photos [see release notes]. No idea what that will do for photo locations.

Moments stores user photo/video files in /home/Drive/Moments/. If you backup from mobile Moments (happens when the app is opened) then it's to /home/Drive/Moments/Mobile/<device name>/. For my Android phone there's then a DCIM folder. Then all my phones have folders by date.

The Moments shared album uses Photo Station's shared location, /photo. But the personal albums are different: /home/Drive/Moments and /home/photo, respectively, and never the two shall meet.

The photo packages are prescriptive for their folder locations.

Last edited: 26. Jan 2020
I found that I had to go into Synology Drive admin console and enable that "photos" folder under Team folder. So now I see the folder in photo station but cant see all the sub folders and cant see any pictures but in the top right there is a "conversion progress" thats been running all night and says total images 30105 and counting down. Do I have to wait for this to finish to see the pictures? Seems to be converting 180 pictures every 10 min.

I wasted 3 days waiting for the conversion to finish and I still cant see my pictures!!!!!!!!!

Too late now... but for future reference... dumping 30000 photos on a package you're unfamiliar with is unadvised. Ten would suffice, and you could easily see how sharing/thumbnailing/facial recognition/albums/etc/etc work.

IMO you would be better off moving those photos to a temporary storage folder and beginning again in a more conservative approach.


Cobra said:
I found that I had to go into Synology Drive admin console and enable that "photos" folder under Team folder.
Click to expand...

That has nothing to do with how Photo Station works.

After almost 4 days the conversion finished but i still cant see the albums. See how "ALL PHOTOS" is hashed out, that is whats going on. If I create a new folder in "J" directory, I am able to move "Cars", "Work" and "Wallpaper" into it and it shows up fine, but all other folders are hashed out. 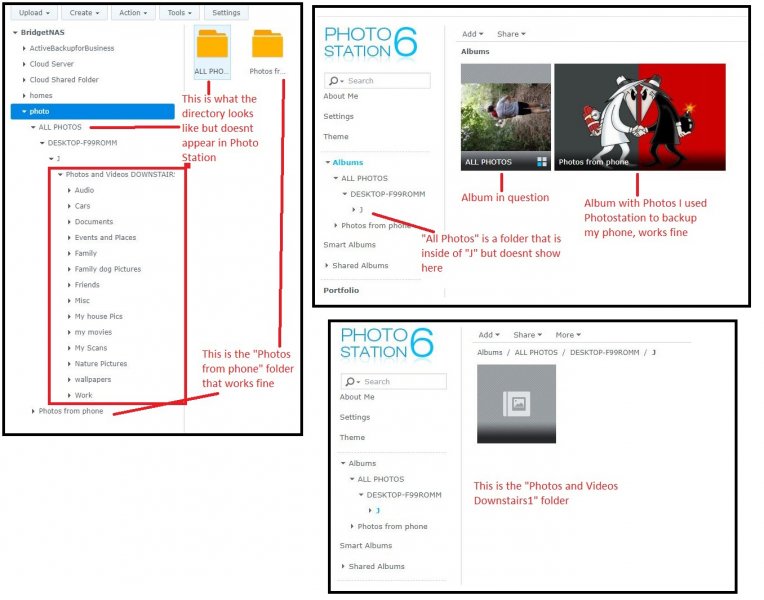 Is there a permissions conflict either in Photo Station or File Station? Can't see why there would be if you used the same NAS account to upload the files and log into PS.

Old eyes here, but looks like you have a folder with a ':' in its name. Have you tried removing that?

I got a reply back from Synology and they had me send them my log file. What they found was an error on 4 files. I deleted those files then did a reindex and everything showed up fine. They were very helpful.
Thanks guys for the replies

Hmm, that sort of information should be published so that owners can debug this rather that going bald pulling out hair.

Any idea how they worked out which files and what the errors look like?

It showed up in the log. This is what they taught me.

You can open the debug.dat file with 7zip. Navigate to /var/log/messages, and see if it gets caught on files in the future. Messages such as "Failed to get misc info from file" or "Cannot open the file" likely indicate it getting caught on that file. Oftentimes it can proceed, but occasionally it will get stuck.

Since /var isn't easily accessed using file sharing I thought it would be useful to have a scheduled task to copy the latest /var/log/messages to somewhere that is. The task can be disabled and run as and when required. As 'root' user the script I added directly to the task's script box is

Bash:
I added '.log' since it's recognised as a text file but '.txt' could be used.

Using BBEdit on Mac I can SFTP directly to this file.

** That we can create tasks that run as 'root' without having to authorise them makes me uneasy. On the SSH command line an admin user still has to enter their password when using 'sudo' and these tasks should be the same. Some NAS will be managed by multiple admin users and there should be some log (e.g. out to external syslog server) that records when changes to tasks are made, by whom, and that they authorised it. It would be better to have a roles based admin setup so that some admins have limited powers and they can be permitted to do some activities when authorised by a suitably empowered admin user.

R
Storage Pool change Question
I'm not sure what you gain with that. You could simply create a shared folder(s) for VMs. Personally I...

M
To digitize or not to digitize, that's the question
Not sure I follow. Do you want support for mysql or maria or what? Mayan as far as I know runs only with...

C
i have a question about sound levels and vibrations
I just put some velco strips under the HD caddies as suggested by @cns00 (by PM) - can tell straight away...

S
[Question] How to re-establish PXE booting with Synology NAS
Yes I tried to play with the Boot order & also tried to recover startup with windows installation media...

2. Sep 2021
SynNoob
S
N
A question regarding Synology's "Secure Erase" feature
So no proof. Even if this were true, that is not a universal drive feature, and surely not with most...

Question about admin account
That’s a bad idea. Hmm. Why would you want to disable it and enable it? Use it for the tasks that...