Replacing a large drive with a smaller drive in SHR-1

First post, please advise if I've posted this to the wrong group, messed up any etiquette etc.

My DS-1817+ has mixture of drive sizes setup in SHR-1. The largest drive is 4TB, there is only one. The next smaller drives are two 3TB. The rest a mixture of 2 and 1.5TB drives.

I believe this means 1TB of the 4TB HDD is not being used by SHR-1 as there isn't another drive with 4TB or more in the NAS.

Does this mean I can pull the 4TB drive and replace it with a 3TB drive? Or will the synlogy require a 4TB or larger drive despite it only using 3TB for SHR?

I've had a 4TB fail another NAS and I'd like to use this 4TB as I have spare 3TB drive on hand.

Offhand, that sounds doable. Swap the 3TB for the 4TB. If repair is not an option, you'll need to add back the 4TB disk and repair.
M

Last edited: 1. Jun 2020
OK, so hats off to Synology, it appears possible to replace the largest drive in SHR-1 with a drive of the next largest size.

I pulled the (only) 4TB drive and it says I only require a 3TB to replace it. Will update this thread with the results of the repair, but it's looking to work the way I hoped it would. 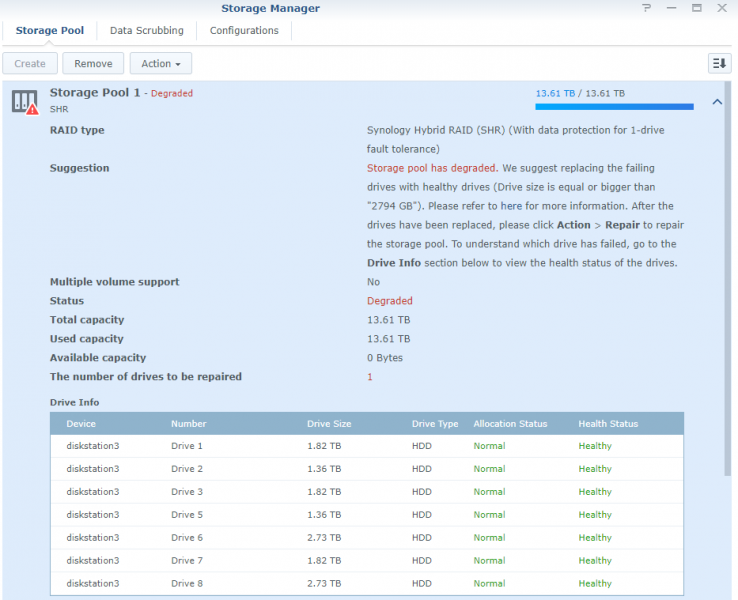 An example -
use all disk drives from Seagate IronWolf line (based on same Part number prefix/subfix definitions) is better scenario than
mixed lines from Seagate, even same lines but with different Part number prefix/subfix definitions. And worse scenario is based on mixed disk drives from different vendors.

Problem of the SHR isn't in the existence of such "new approach" in the redundancy. The problem is based on Synology low level responsibility to learn unskilled users, how to setup and operate their devices in best way. Valid for each other vendors.

DS2 and DS3 are backup NAS's, switched on for a few hours once a week to sync content from DS1 and is mixed blend of disks.

I understand what you are saying about keeping similar brand/part numbers in a volume, that makes total sense.

Unfortunately I only have enough funds to grow the arrays incrementally, and models change over time and with different capacities, but I'll try and expand within your recommendations in future.

Here are the drives in DS1, so while they are all WD Reds, there are few different part numbers: 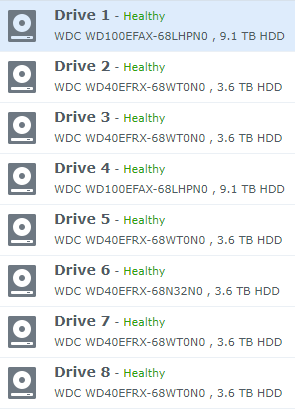 As I need more space I've been replacing the 4's with 10's and pushing the 4's down to DS2 and DS3 to replace the lower capacity drives in those volumes.

I hated to have dozens of old hard drives lying around when I could buy two more Diskstations and put them to good use as local backups, to supplement my backblaze online backups. I can recover locally if I need to without have to pay backblaze recovery fees, and recover a lot faster, but I still have backblaze there for piece of mind.

so you are glad that you have 40EFRX and not 40EFAX

jeyare said:
so you are glad that you have 40EFRX and not 40EFAX
Click to expand...

I am very glad I don't have any SMR spindles. If what they say is accurate it would be terrible if I had to measure each repair in weeks rather than days.

Have I said how much I love the flexibility of SHR-1? :-D