I did have a Reverse Proxy working but I broke some other stuff and now on recreation it doesn't work....

I've installed Nextcloud in a Docker. It works! Its on port 8080, wise folk here suggest a RP and so I have set up the subdomain nextcloud.mydomain.tld. The DNS (external) is set and propagated. I asked LetsEncrypt for a new certificate with my nextcloud subdomain added. Then I followed the other instructions here.

The RP is set up thus:

I know I need to fix the trusted domain in Nextcloud but I'm in the same place I was yesterday when the PR appeared to take me to Nextcloud.

Actually that doesn't make a difference, however...

I'm typing cloud.mydomain.tld into my browser. If I type https://cloud.mydomain.tld I get the expected Nextcloud "untrusted domain". So my RP does work, now I need to sort the http / https issue. I always want http request to go to https.

Not if its off! Don't I just need to ensure any http requests on port 80 are sent to https port 443?

Hard to tell if you're making that little goof just here, or when you try to access the page.

And, you'd need to make sure to type in https://nextcloud.mydomain.tld . Otherwise, you're going to pull up port 80, not 443, and 80 isn't forwarded by your current reverse proxy setup.


akahan said:
you'd need to make sure to type in https://nextcloud.mydomain.tld
Click to expand...

Yes, but I never type http anything and assume nobody else does. The BBC is at bbc.o.uk not BBC - Home

Can I fix that? I tried setting the Destination Protocol to HTTPS but that got me a Synology 404.

May have to RTFM!

That https:// bbc dot co dot uk wont unlink, you see what I mean though.

Curently reading Tutorial - http to https redirect which may be of help getting my redirect set up.

Last edited: 12. Jun 2020
If you want both port 80 and port 443 to forward, you could just make two entries in your reverse proxy setup, both pointing to the same place.

So, the first one you already have.
The second one would be (to use your formatting):

The "problem" with this setup is that when users connect without https, they'll be using an insecure connection. What you REALLY want, I think, is for the user to be forced to https even when they fail to enter the https://

So then you say, "I'll just check the "use HSTS" option on the https entry, then I don't need the http entry. That'll fix it!" And it might... but it seems you have to reboot the diskstation after setting this, for it to take effect. And, you may have to clear your browser cache as well.

Thanks @akahan, I'll give this a shot. @Rusty 's tutorial isn't doing it for me.

Let us know what happens!

akahan said:
What you REALLY want, I think, is for the user to be forced to https even when they fail to enter the https://
Click to expand...

Yes. I tried your second option of only having the one PR but it didn't work, even after a reboot. But two RPs seems to have done the trick.

No doubt it will all go wrong later so standby...

DeltaGolf said:
Thanks @akahan, I'll give this a shot. @Rusty 's tutorial isn't doing it for me.
Click to expand...

It should. Works just fine for me. I have about 20 or so RP parameters and they all redirect from http to https just fine.

It works for me too, but, again, I find that I have to reboot the diskstation for this to take effect, and it seems (maybe my superstition?) not to work until I've also cleared the browser's cache, if the browser was previously connecting to the same container via https.

Rusty said:
It should. Works just fine for me.
Click to expand...

I'll give it another bash. You know me, either it works first time and I break it, or I have to have three goes...

OOOH, you know what really helps? If you're on a Windows machine:

So I tried and failed again. I've tried a couple of times. I've used @Rusty 's tutorial (despite his typos and formatting!) and even followed along with Gudbrand Olimb"s version. I slept on it and tried again. Still no joy.

One thing to report that on creating the second Reverse Proxy, on "OK" to save I had much waiting, more than enough time to make coffee and then decide to reboot the DiskStation. The PR was there on startup, but the same thing happened the next time. Maybe nothing, maybe something?

So I'm expecting (wanting - demanding!) my subdomain 'nextcloud.mydomain.tld' to get me to my Nextcloud web pages at port 8080 via https whether or not anyone typed http or not.

After following the tutorials typing nextcloud.mydomain.tld gets me to a secure page which is Synology 404. 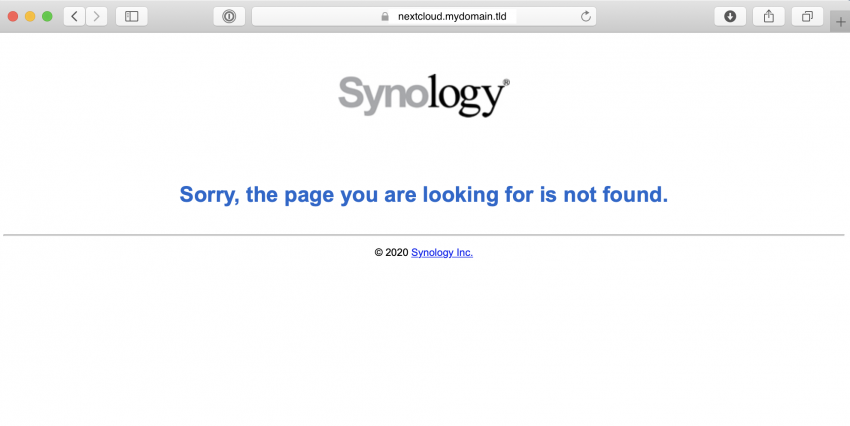 Other points of failure:

Port 8080 is open on my router. The subdomain 'nextcloud' is a fully qualified domain name and has a record in the DNS which points to the public IP of my router. All stuff that generally works, has worked on A N Other linux server.

So the http to https appears to be working? But then I'm not getting sent to or am being blocked from accessing Nextcloud at port 8080?