Info Seagate: Looking Into The Future

Summary:
STX (Seagate Technology) believes that more than 90% of bits for mass storage will be on HDDs in 2025, considering the lowest absolute cost per bit offered by HDDs.

The company also showcased its heat-assisted magnetic recording (HAMR) capabilities and mentioned that it would have a 20 TB HAMR drive by the end of FY 2020 as well as a subsequent ramp in FY 2021. HAMR has the potential to scale further compared to other energy-assisted technologies due to its higher energy capacity, with management planning to release a 30+ TB and 50+ HAMR drive in FY 2023 and FY 2026, respectively. 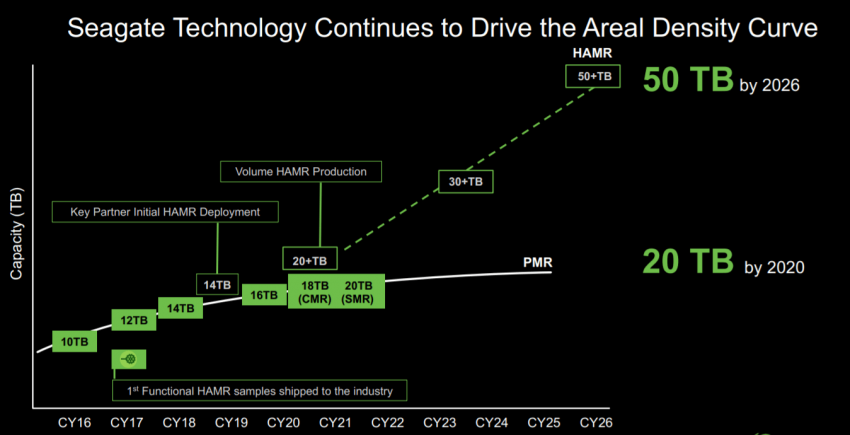 STX also presented its new MACH.2 dual actuator drive, which offers about 520 MB per second of IOPS, 2X faster than the I/O of a single actuator drive, albeit with moderately higher power consumption.

On the other hand, Seagate is already shipping 16TB HDDs with volumes expected to increase in December, providing an early advantage over Western Digital Corp. (WDC), which is currently shipping 14TB HDDs at the high-end of its portfolio.

According to this, we will still be using mechanical disks by 2026?!
I believe SSDs will give HDDs a good run for their money by that time.

according cost of SSD technology the HDD will survive in Large allocation space, means >14TB from now

Re: HAMR based technology
Heat-assisted magnetic recording (HAMR) is a magnetic storage technology for greatly increasing the amount of data that can be stored on a magnetic device such as a hard disk drive by temporarily heating the disk material during writing, which makes it much more receptive to magnetic effects and allows writing to much smaller regions (and much higher levels of data on a disk).
rest of info