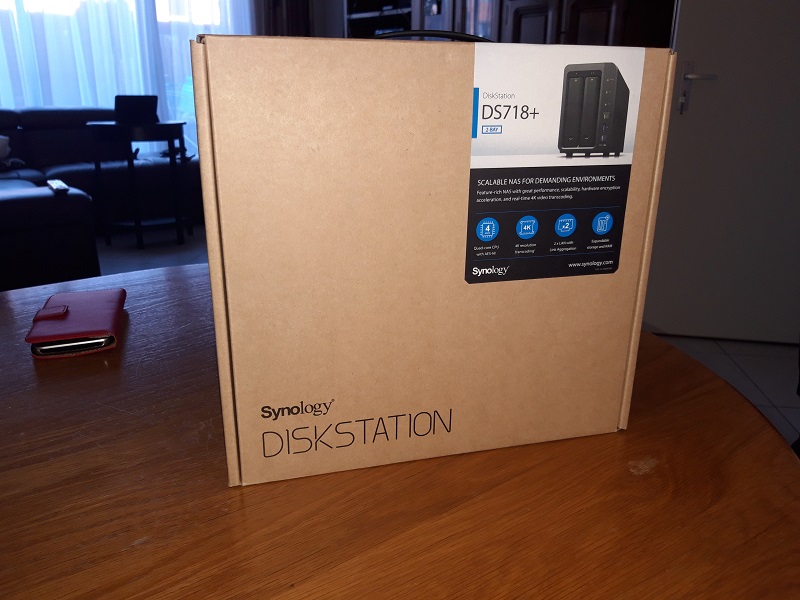 Let me first show what config and infrastructures I currently have now so I can explain better what I plan to do with this new NAS and where it will fit in our environment and infrastructure. This is a very high level overview of the network infra:

The DS718+ will be placed in Site 2 as it pretty much has the overal best internet performance, with the option to upgrade it if necessary. This NAS will become the 'head NAS' and will also serve as the main NAS point for any other family members that connect to the NAS from the Internet (for those who don't have their network joined to out site-to-site VPN cluster). This is all done by using public DNS domain names and split DNS zones in the internal networks.

All the NASes will have their shares sync'ed which each other whith Drive.

Below is what currently running on my DS216+II that I want to transfer to the DS718+ .

But it will also run other additional packages that is able to run side-by-side if using DNS tricks correctly. Especially when it comes to Docker images and NordVPN proxy servers.

Both the NAS'es currently in site 1 and 2 have a USB disk attached. On both NAS'es, there is a HyperBackup task scheduled every night to make a backup of all applications and to save the backup on a seperate share called 'SystemBackup'. This share is also synced (2-way) with Drive towards both NAS'es. A 2nd HyberBackup task runs later to perform a full backup of file shares, but obviously in this tasks it's not selected to backup any applications. Smart Cycle is enabled. 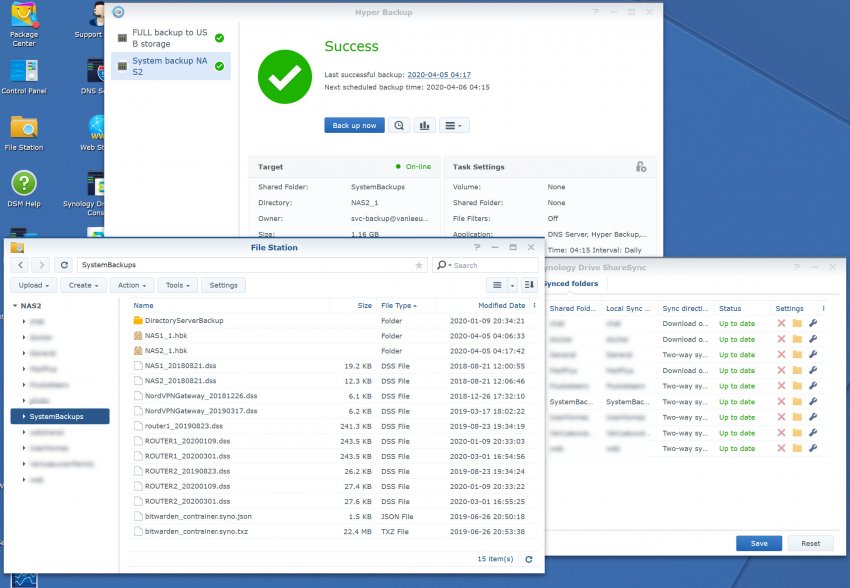 So, this means the backups of all the packages/applications is already in both sites. So when I setup the DS718+, I should be able to just shutdown the above mentioned packages on the DS216+II. Then run another final backup. And then just restore it (when it's synced) to the DS718+ (after it's joined to the LDAP), then update the DNS records and voilá (will ofcourse have to be carefull about the MailPlus share)

Gets a new home in Site 3 where it will act as a local file server and some Apple stuff.

And ofcourse, with the DS718+ I can hopefully try out docker containers for the [email protected] project .

I remember you wanting a 718+ for a long time. Congratulations

Nice one m8! Another one joins the family. 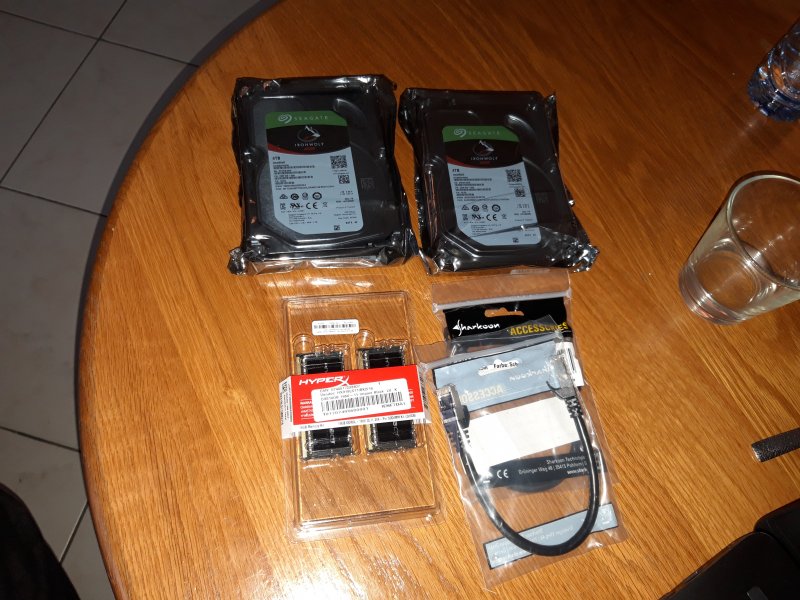 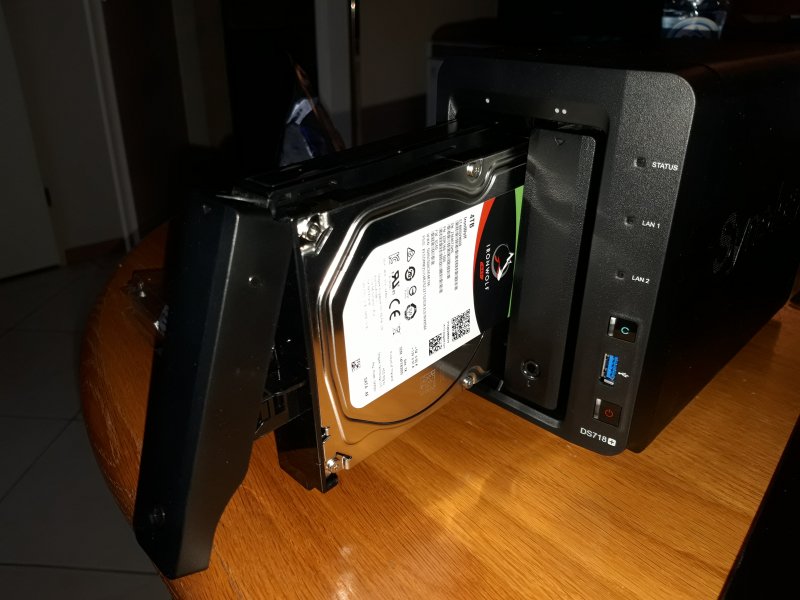 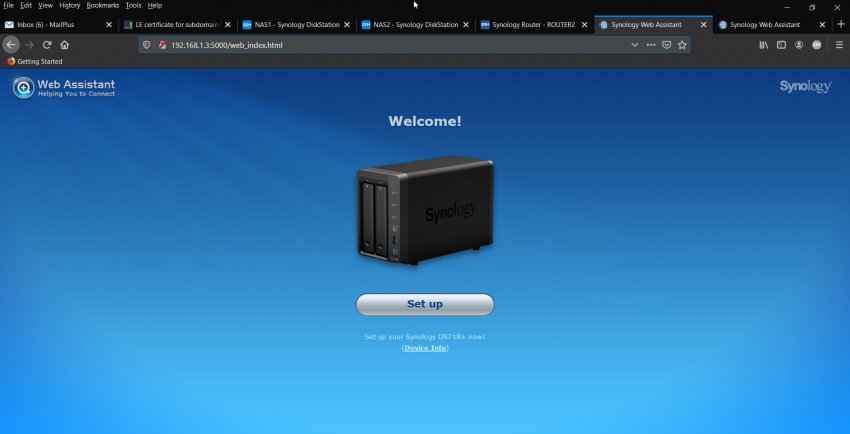 And create a new SHR storage pool with a BTRFS volume: 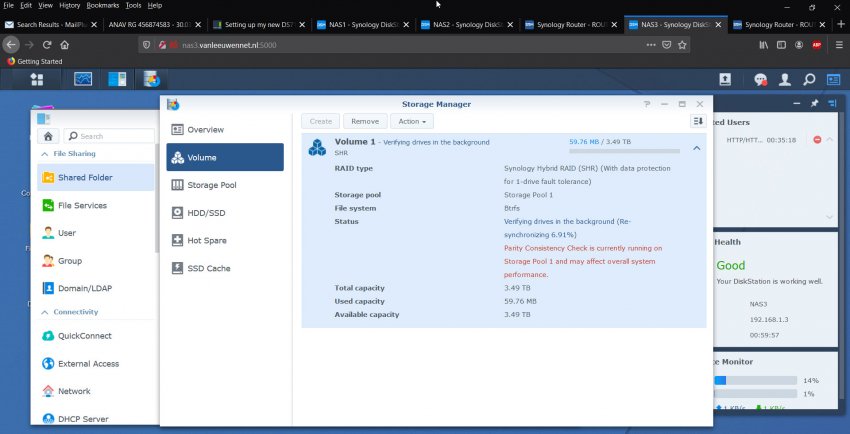 I like the shot glass on the table too

congrats on the new unit!
D

Why are these more expensive than the 918+ on amazon? Weird.

I noted that the glass was empty: @Shadow settling your nerves first?

Why is everyone obsessed by a glass of water? xD

Aroud 120 EUR cheaper here in the Netherlands. But I got this for a reduced price and saved me another 80 euro's.

Shadow said:
Why is everyone obsessed by a glass of water? xD
Click to expand...

No :p
And not sure it would be wise to be drinking whisky while setting up a new NAS. Might end up trying to insert the disks 'upside-down'.

Shadow said:
No :p
And not sure it would be wise to be drinking whisky while setting up a new NAS. Might end up trying to insert the disks 'upside-down'.
Click to expand...

Or trying to insert the NAS into the disks

As they are in place and hooked up to the networks, first thing to do now is to resync all their file shares as they include the backups of all the packages (again: I use external HDD's to make full backups of the file shares ) .

The new DS718+ (NAS3) will become the 'main point', so everything has to re-sync. Here we go. Hope this'll be done this week: 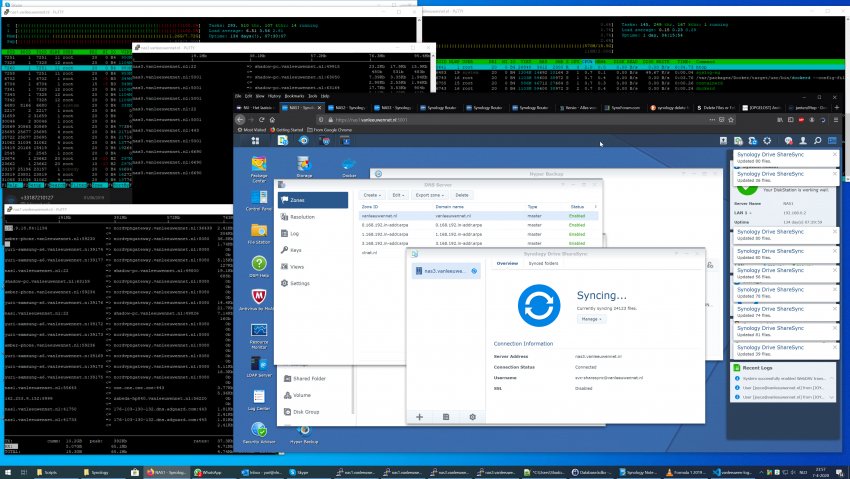 Have you got connectivity so that CMS can be used to manage all NAS from a central point? I think it requires you DSM portal's HTTPS port to be accessible from the Internet, or you could be using VPN tunnels between devices/sites.

fredbert said:
Have you got connectivity so that CMS can be used to manage all NAS from a central point?
Click to expand...

This is all done and migrated to NAS3 (DS718+), altough the re-sync is still running.
As the other services was all configured to use DNS and reverse proxy's, it was no problem at al to disable them on the old NAS1, HyperBackup restore them to NAS3 and update the DNS records and reverse proxy's. Everything just worked flawlessly.

MailPlus was an interresting one tough. It just picked up the MailPlus share that was already present without a problem. So all the mailboxes and the content was immidiatly available. Maybe it's because I already configured NAS3 back into the LDAP infra before doing this so MailPlus had no problem rebinding everything in the background?

I've now also installed Virtual Machine Manager on my NAS3 (DS718+) so it can host a virtual DSM instance that can act as a proxy gateway to my NordVPN subscription. This virtual DSM instance has an OpenVPN UDP connection set to a server in Switzerland and has the Synology Proxy server package installed and configured. 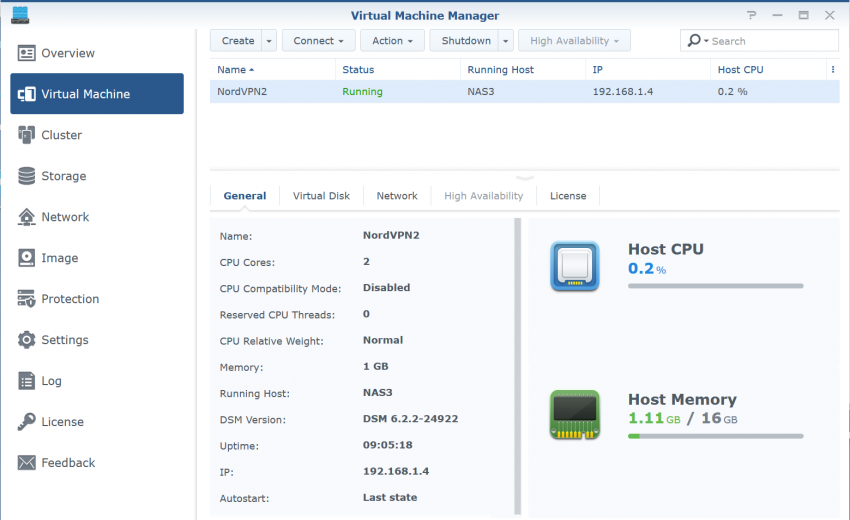 It will be the 2nd proxy in addition to the one that is still running on my NAS1 (DS216+II). But as stated in my first post, site 2 and site 3 will benefit greatly from this due to the better glassfiber internet connection in that site. I will also be using DNS tricks to make sure the sites use the best outbound connections possible.

Congrats on the DS718+ purchase. Also thanks for the guide, it gives me a few ideas as to how to improve my (similar, but less well-connected) setup.

From this post it's clear I've completely abandoned the use of virtual machines (DDSM and/or vDSM) just for a proxy server in my network that goes to NordVPN. Maybe they'll serve a different purpose some day, but for now they are switched off.

And while I don't know if I should be angry that so recently after my DS718+ (ok, it wasnt a new one...), some new NAS models are announced, including the successor of the DS718+.. Anyhow, nothing that can be done about this anymore.

Meanwhile my brother and I (who I've infected with the Synology-virus, and he lives at site 3) have been quite busy with Docker containers. 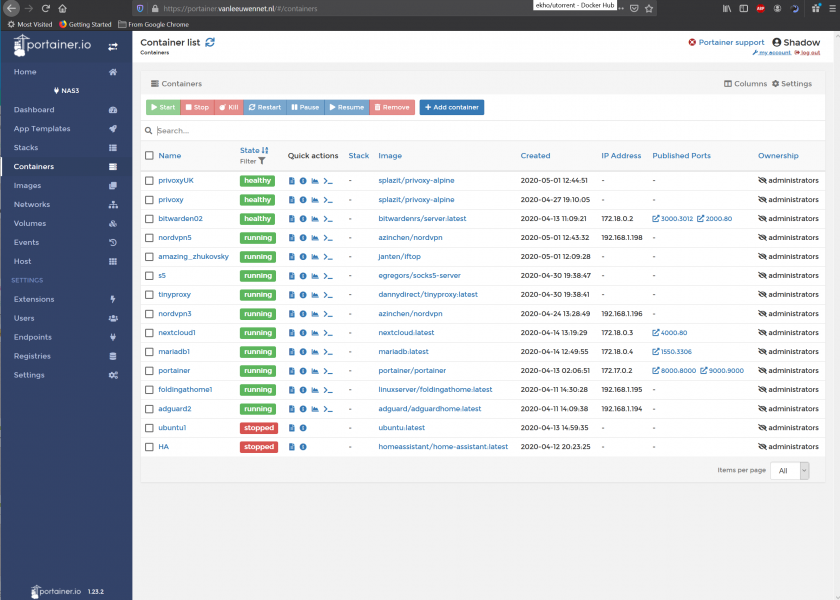 I'll be interested to see what DSM7 will bring as I hear it'll also include some major updates to Synology's Active Directory solution. Right now, there can only be 1 domain controller. For me thats a bit risky as thats not WAN resilient at all. So thats why i'm using LDAP at the moment to retain the same accounts over every NAS and Syno Router. After the DSM7 update, it should be possible to have additional domain controllers. That may interest me to migrate from Synology LDAP to Synology AD. But ofcourse that may be quite a challenge on itself!

It's good to hear that the SynoVirus(TM) is spreading!

Right now the DS718+ with 2 VM's (one of them a mailserver that also used SQL) and an active MariaDB docker container:

718+ and 720+ acting different on same DSM setting
Thank you! Here I was thinking it was me, but couldn’t find it in anything I ever touched! I’ve been...

Setting up Synology NAS as a PVR
Well, I'm from Croatia and we have a messed up situation here regarding tv channels and programs in...