I have a DS2419+ with Western Digital Red drives running as a Synology Raid array. We are a research lab and use the NAS as a platform to store and process data so we have eight Windows 10 workstations connected to the NAS via mounting it as a Network Drive and everything is communicating through house LAN ethernet connections. Each workstation reads and writes data onto the NAS where we are reading in thousands of raw data files to the local workstation, doing some statistics and then writing tens of thousands of output files back onto the NAS (usually small files like sub 1mb jpegs). The issue we are running into is that the NAS is becoming increasingly slow in read and write speeds and currently transfer rates have slowed to around 1-3mb/s whereas previously they were around 70-100mb/sec on the same system. Even folder navigation is incredibly slow with opening a folder taking upwards of 45 secs. Interestingly, this slowdown seems to only happen in Windows as I can log in to the web interface and download/upload files through the Synology OS at around 100mb/sec. Is the fact that we are generating file folders and subfolders with upwards of 50,000 files in them causing general slowdown? My guess is this has something to do with indexing or caching on the windows side but I'm not sure what to do about it.

How are the setting for SMB service on the NAS side (Control Panel > File Services)?
C

AFP not need unless you have a Mac in your setup.

Regarding SMB... you might wanna terminate SMB1 (if all clients are win10) and switch to max smb3 (min smb2) setup. Try it that way. See if there will be any change.

I have settings as Rusty said: 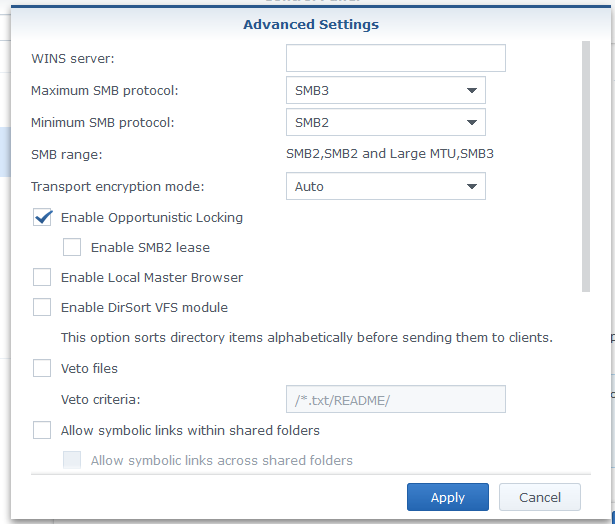 Works fine for me. Scroll to the bottom in that window and hit the button Clear SMB cache. It helped me when Windows explorer didn't find my server.