Rather than deleting this video, this post is left here as a warning so that you know not to follow it's instructions on placing media in the 'plex' Shared Folder. The installation of Plex Media Server will create the 'plex' Shared Folder and its purpose is to hold the operational data used by the Plex. You should use a different Shared Folder for media files and allow the plex user read-only access, ideally, unless you want Plex to be able to delete media files in which case read/write access is needed.

The Plex installation places enough warnings in the plex Shared Folder to not place media files in it, as can be seen in the video itself ... it's unclear why this has been completely ignored in the video.

This idiot does not understand Plex. He created a "PLEX "shared folder (before installing Plex) where he put his media files/folders. After installing Plex, Mr. Numbnuts shows a screen at 34:26 which clearly shows that Plex has reserved for its metadata and populated it with warning statements (in multiple languages) stating not to place media files in this folder.

He then goes on to say it is fine to place media in the subdirectories. What a dolt.

Don't believe me? Well, this video has already hit the Plex Forum..

DO NOT PUT MEDIA IN THE PLEX SHARED FOLDER !!

If you you look, you will see 6 files written in different languages warning you to NOT put media in the Plex shared folder.

The Plex shared folder is reserved for metadata and system files only!

Just because some idiot on Youtube did it, does not mean you should. The person in question was informed of his error, but apparently he has done nothing about it.
Click to expand...

@Telos good points. I've added a notice to make sure this is known to be *not* what to do.

After my post above, I stopped watching at 34:26, as I couldn't bear to watch more. Today I thought I'd give it a further look. This guy is unbelievable. He pulls up the "plex" user permissions for applications (timestamp: 41:16) and leaves them all checked. 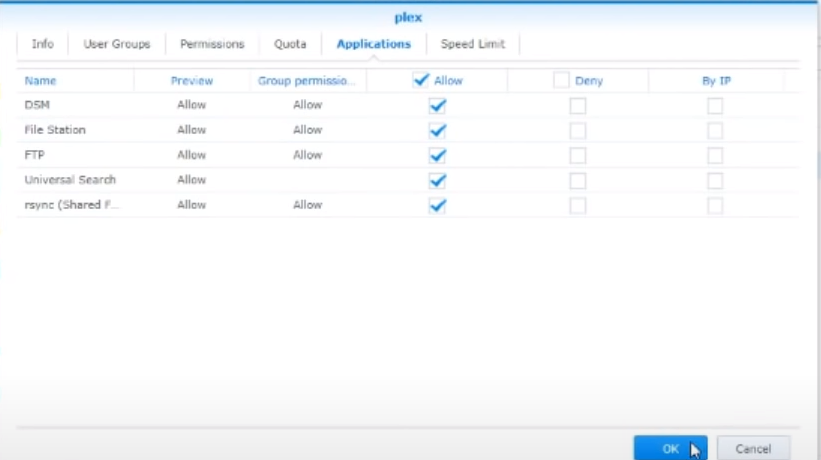 Then he says that Plex doesn't need access to all these, but "it definitely needs access to File Station". Wrong. Apparently he confuses access to shared folder permissions with the File Station application. This dude should be banned from the internet for the damage he is doing to those learning about NAS usage. FWIW, I deny all those applications.

Later he advocates setting a NAS fixed IP via the NAS network settings. What he fails to do, is to use a value outside the IP range that the router hands out. While my preference is to reserve/assign a fixed IP via the router, one can do this with the NAS, but in the manner shown a LAN restart may hand the IP he used to another device before the NAS boots up. Messy, messy. He then states that if you were to take the NAS to a friend's house that you would have to use the "RESET" button to allow you to clear the network connection.

The good news is that this guy will be sending frustrated users to our forum when they discover that the YouTube thread offers them no help.

Rob creates a lot of content, sometimes I think he types the articles while he’s sleeping too. Lots of technical, spelling and grammatical errors

I much prefer Kodi, it's far more forgiving and controllable, for me.

Tedster said:
I much prefer Kodi, it's far more forgiving and controllable, for me.
Click to expand...

Wait with anticipation for his Kodi series... you will abandon all hope of a controllable system, lol.