In the first half of 2019, we are seeing a rather interesting release trend from the big NAS brands, Synology and QNAP. Generally, each year, the two brands release their biggest desktop solutions are roughly the same time (Q3/Q4 of the year) and then NAS buyers are left choosing between these two brands for which device best fits their needs. However, we are seeing a rather off change in the 2018/2019 release structure with the previous generation of Synology NAS devices of 2017/2018 being their current range and QNAP releasing a bunch of their newer units at the start of the year. The result is that many buyers are comparing newer QNAP NAS with older Synology. Today I want to look at two units you guys have been comparing frequently, both RAID 5 enabled and both with a dual-core J3355 Intel CPU that can support lots and lots of functions from 4K transcoding and Plex, all the way to smarter backups, cloud migration, surveillance and more. But, just like many Synology VS QNAP comparisons, it isn’t as straight forward as A or B, and the Synology DS418play Media 4 Bay is being compared with the Media and Business 3-Bay TS-351 QNAP NAS. The Synology PLAY series has been around for a while and is well established and the DS418play is the latest and greatest addition, release back in Winter 2017. Whereas the QNAP TS-351 is a new and unique kind of 3-Bay RAID 5 NAS that also features HDMI, dual LAN and 3 internal SSD bays to compliment the 3 Hard drive bays for raw fast storage or caching. This means the QNAP is trying to cover more than home media and for those of a slightly more technical mind, give you more bang for your buck. Let’s see which one is best for you and your data.

I'm happy with it. Serves my needs. 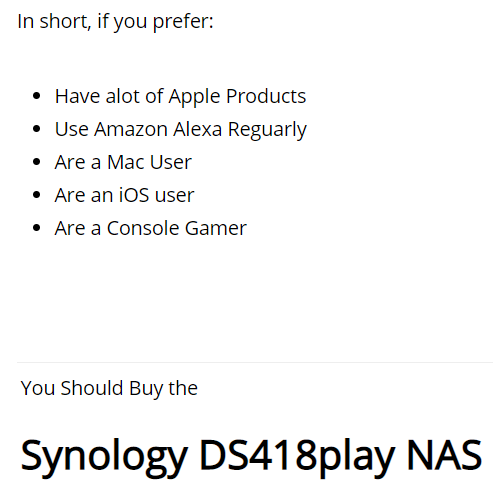 The inference here is that if you are simple-minded, and want a preconfigured "out of the box" experience that leaves little ability for adaptability/customization... go with Synology. Well... none of those bullet points describe me and yet I'm in the Synology camp. Go figure.

I also have DS418play with 6GB of RAM and also don't own any Apple device (although I'm thinking about to change the ecosystem).

So my octogenarian mother-in-law should get the QNAP... o-k! I agree that her Windows 10 laptop is more effort to understand that my Macbook, but it's me having to support both.

NAS Compares Tailscale on a Synology NAS - Secure Remote Connection without Port Forwarding or Firewall Rules
Welcome to NASCompares YouTube channel! Check out our next video below...

NAS Compares UPS for Your Synology or QNAP NAS - 8 Things You Need to Know & Recommend UPS' to Buy
Welcome to NASCompares YouTube channel! Check out our next video below...

NAS Compares Synology vs QNAP NAS Debate - Which is Better for you?
Nice to see @Rusty just watching it now.

NAS Compares Synology DS3622xs+ vs QNAP TVS-h874 NAS Comparison - As Quick As Possible
Welcome to NASCompares YouTube channel! Check out our next video below...