These recent thunderstorms we've had in the UK got me thinking, I really should get a UPS. I know, I know this should have been done a long time ago.

Thankfully, I cannot remember the last time we had a power outage, and I've been in the same house for over 35 years. One day that luck is going to run out, and as they are replacing gas mains in our street soon I'm sure some bright idiot will go through a cable at some point.

Anyway, the reason for the post is what would you wonderful people recommend for a DS1819+. I've looked on the Synology website and searched for a suitable UPS but cannot seem to find one available, that allows you to replace the battery and has automatic shutdown for the NAS. I also don't want one that is going to beep at me every few seconds to tell me the power is out and the UPS is running.

First, what are your wishes?

For example, I have these hooked up to my NAS: 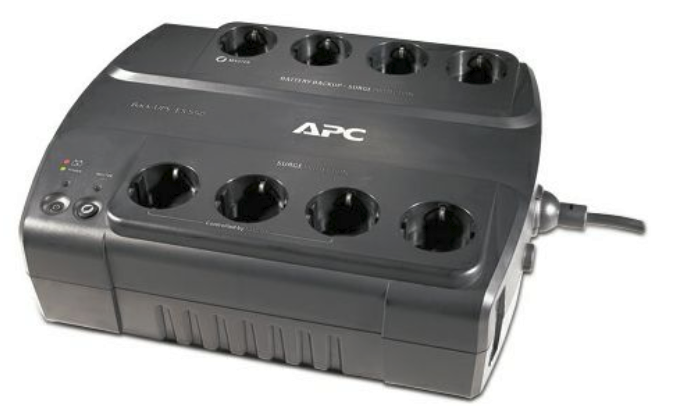 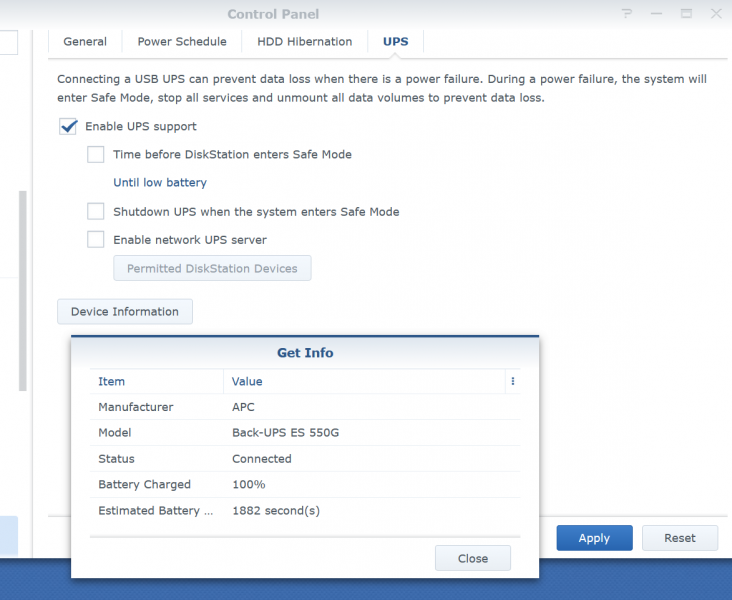 The data cable is connected to a USB port to my NAS and it automatically recognized it. On my personal test on a DS216+II (and some other network gear), it was able to hold on for about 20-25 minutes. For me, that was longer than I actually asked for. I don't need to have it running for hours. It does beep when out of power, but I do believe there is a way to turn off that beep. Think I have to attach it to a laptop and turn it off via some APC software.


So, how much devices are you going to connect to the UPS? How much capacity do you want (how long must it be able to run)? Are you ok with a simple USB connection, whereas the NAS can act as a UPS server as shown in the screenshot above, or do you want a fully dedicated network UPS (more expensive)?

Most any recent APC model will suffice.

Running EATON and CyberPower models with my devices. 0 problems.

APC now, but used to have PowerWalker and no issues.

I have a PowerWalker one. I recently changed the battery on it too. Decent 3rd party versions were available on Amazon for about a third of the price of the branded. The price of an original was pretty much the same as a complete new unit!
R

A name I hadnt heard of before until I picked one up on amazon for what appeared to be a pricing error was Tripplite - its rated 1500w or something, it kept a RS3618xs, DS1813+, DS1019+, DS118 and 3 switches with about 5 poe cameras running for almost 30 mins in a very recent 1.5 hour power cut. All NAS boxes are set to safe after 10 mins, but they still keep going so do consume some power.

Cheap(ish) hot swappable batteries also in both. Ive used APC/powerwalker before also, APC have been ok in the main, had a couple of cheap ones go bad after just over a year. Powerwalker im sorry to say, the one I had was just rubbish, didnt have anywhere near the runtime it was advertised at.

Thanks all, I would just like that peace of mind in case something goes awry. If I could get the Synology to auto shutdown in the event of a powerful I probably will breath easier.

I have all music projects on my NAS, backed up to external drives. I'd hate to put it all on there again as they are several terabytes in size.

I had never heard of Eaton before but found this one Eaton Ellipse ECO 1200 USB Uninterruptible Power Supply Tower: Amazon.co.uk: Computers & Accessories and this one Onduleur Eaton 5E 850i - 850VA (Prise IEC C13): Amazon.co.uk: Computers & Accessories which may do the trick and keep my Synology router going for a while also. Better go and check how much power I would need. Thanks again.

APC Back-UPS BX - BX950UI https://www.amazon.co.uk/gp/product/B00T7BYX2Y
Likewise, pricey today as I paid £80. Supposed to be non-replaceable battery pack but I think it's doable. It has IEC-C13 power sockets so needs cables with IEC-C14 ends (I got cheap 4-ways and converted them, but you buy them ready done. Or for important devices to isolate from the shared 4-way ... a 1-way).

Thanks Fredbert, I had seen the BE700 but the DS1819 was not listed as compatible on the Synology website.

Well I plumped for the APC BE-700G and it's all installed. Gave me the chance to tidy up the wiring on the desk. The UPS is now on the floor under the desk, out of sight 😄. Bring it on gasmen, when they come to refit the pipes in the street. They went through a cable a couple of weeks ago not far from where I live 🙈.

The BX950UI isn't listed but works too with the NAS: it's hooked up to the Mac.
Click to expand...


AdrianEarnshaw said:
Bring it on gasmen, when they come to refit the pipes in the street. They went through a cable a couple of weeks ago not far from where I live 🙈.
Click to expand...

I think that's generally the reason I get outages, or similar pickaxe/digger related event. But sometimes we get a warning of works happening.
T

I have CyberPower 1350VA/810 watt UPS's from Costco. They are $100 there. The reason for choosing Costco is they take them back for exchange, so when the battery dies you can take it back and get a new one. My 1819+ recognized it when I plugged it in.

AdrianEarnshaw said:
I also don't want one that is going to beep at me every few seconds to tell me the power is out and the UPS is running.
Click to expand...

Just noticed this. You've used the PowerChute Personal software (google for it if you haven't)? It can configure the UPS to disable the alert beeping.

rolandrat said:
Also have a Tripplite SMX1500LCD which kept my other rack of RS1219+
Click to expand...

Does DSM recognize your Tripplite? I've plugged one in before but it didn't recognize it; it had an endless cycle of connections & disconnections.
R

Gerard said:
Does DSM recognize your Tripplite? I've plugged one in before but it didn't recognize it; it had an endless cycle of connections & disconnections.
Click to expand...

Never had that problem with that one.
G

rolandrat said:
Never had that problem with that one.
Click to expand...

Interesting. After I had that issue, I looked at Synology’s compatibility list (although for a DS718+) and only apc and cyber power ups’ were compatible.

Gerard said:
Does DSM recognize your Tripplite?
Click to expand...

FWIW, I don't have a Tripplite, but my APC wasn't recognized until after I restarted my NAS.

R
UPS Safe Mode and shutting down of Permitted DiskStation Devices
I have my Synology plugged into a UPS with USB. I have the Synology setup so that it will shutdown my...

Info APC UPS; Heads Up re RJ45/USB Cables Availablity
Life would certainly be simpler if all the APC units used USB/USB but a brief look at the product lists...

Time to upgrade my UPS, hints?
I'm using APC BR550GI with my 218+, and it's working a treat. Endured several outages without a problem...

UPS (APC ES 550) acts strange
Since you're on Windows, and if you haven't already, you can use APC's PowerChute Personal Edition...