Have you read this article?
Upvote 0
B

The only change was the DSM update. Hibernation worked previously.
Upvote 0

Have you read this article?
Upvote 0
A


DS-213j:
- Several updates done on March 31: File Station, Synology Drive Server, Universal Search, VPN Server (see screenshot). And even if it's not part of the logs, I'm pretty sure that the update to DSM 6.2.4-25556 was done that day as well.

- No other settings have been changed before or after that day.
- Since then, no more "Internal disks woke up from hibernation" entries are visible in the logs and whenever I check the device itself, I can hear the disks are spinning
- USB disk hibernation still works fine, my USB drive wakes up every night for my backup job 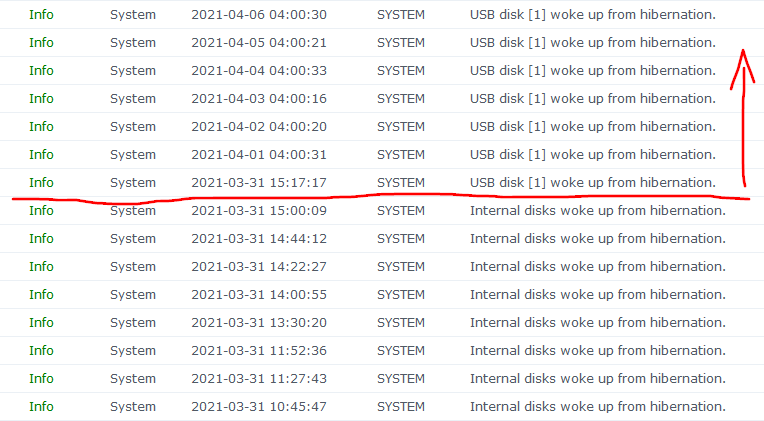 DS-216play:
- Several updates done on April 6: Synology Drive Server, Universal Search, WebDAV Server, File Station, Speicher-Analysator, Node.js, VPN Server, OAuth Service (see screenshot). And even if it's not part of the logs, I think that DSM 6.2.4-25426 Update 3 (caution: that's even an earlier version as above!) was installed that day. See below why I'm sure about that. 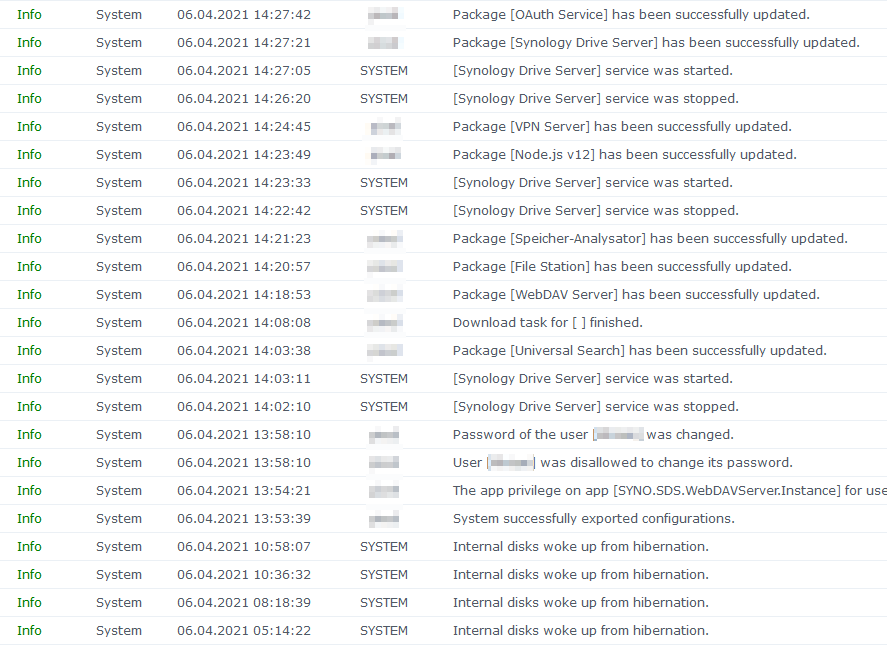 - No other settings have been changed before or after that day.
- I have realized the issue already on May 10. On that day, I installed DSM 6.2.4-25556 Update 1 (the one this thread is about). Before, DSM 6.2.3-25426 Update 3 was installed. I'm 100% sure about both versions because I noted them down before and after doing the update.
- The update brought no improvements unfortunately. When searching for "hibernation" in the logs, you can see that it stopped doing that on April 6 (see screenshot). You can also see that I've played around with the hibernation time, which also had no effect.


EDIT: Oh, and yes, I have read this article
Upvote 0
A

I have to withdraw my assumptions from above posting.

So, the remaining things that could cause the hibernation issue are the package updates that I did on Mar 31, 2021: File Station, Synology Drive Server, Universal Search, VPN Server. Additionally, I have installed WebDAV Server, Hyber Backup, OAuth Service, Synology Application Service (needed for Drive Server) and Node.js v12 (needed for Application Service). In the last few days, I have played around with stopping different services.

It turned out that my disks are successfully going to sleep again while having File Station, Synology Drive Server, Universal Search, VPN Server, Hyber Backup, Synology Application Service and Node.js v12 running. Which means that either WebDAV Server or OAuth Service are causing the disks not going to sleep.

I've just activated WebDAV Server again and will check if this will lead to non-sleeping disks again...
Upvote 0