Hi All,
For my first attempt at blatantly skimming you all for your hard-earned knowledge, I am a little stuck with the rather pedestrian subject of Video Station. Specifically, the export and import process for when I move stuff from my aging DS414 to my shiny new Synology that should be arriving shortly.
Migration Assistant is not an option for the DS414, and honestly in most cases I can move things over manually, so not a problem. (New Synology, new disks, network connection.)

My concern (if that is not too strong a word) is with Video Station. On my DS414 there is obviously a certain percentage of media whose metadata was 'manually' corrected. Obviously I would like to avoid repeating this time consuming exercise. I have (surprisingly) found little material on transferring the Video Station database, although:
Synology forum 1 is certainly pertinent. Telos pointed out the simple Export function that apparently worked with 'much' of the metadata.
Synology forum 2 suggests attacking the database itself, although the thread is quite old now so I'm not so keen.
In Import Metadata from SynoForum (from the aforementioned Telos?) where the Export function is again proposed,

So... after seemingly answering my own question, I tried the Export function and was surprised/shocked when it started creating .vsmeta files in every single folder in my library. (Although, to be fair, that is exactly what Telos had stated, although I managed to filter that part out.)

I guess I am simply looking for reassurance, because in my Happy Place, I was always keen to minimise the number of entries I manipulated manually, so that as far as possible the auto tagging tool could do its job (and would therefore update the info if it was subsequently refined). Surely, if every single film and episode has a .vsmeta attached, then this can no longer happen... Is this correct? (If it is correct, then this appears to be a real shame.)
Or am I barking up the wrong tree and worrying about nothing?

One final question... In VS and Plex, Telos mentions the Plex roots of Video Station. Is the naming convention for Plex identical to that of Video Station? (Soon having a Plex capable NAS, it is a likely step for me, and I know it is possible to use the same media folder structure for both. I sincerely hope the answer is "Yes".) And Jellyfin, does that use the same naming structure?

Any light you are able to shine would be appreciated, thank you!
Sort by date Sort by votes 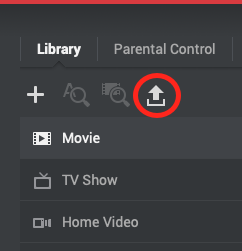 Selecting each library in term and clicking the Export Video Info icon will create a .vsmeta file for each media file in the library, in the same folder as the item. This will mean that it doesn't go off and retag the libraries because that takes ages.

Hyper Backup didn't do anything for bringing my Video Station configuration from the old NAS to the new, but having the .vsmeta files meant that as I went along recreating the libraries their tagging was read-in from these files. You'll have to create user profiles again too.

I've manipulated probably all the items in my libraries as I wanted corrected UK age classifications so that I can limit who has access to what. Useful though it is to have different episodes of a TV show being tagged with a range of global systems, I decided to harmonise the ratings And was keen not to have to repeat this again.

As for Plex and Video Station...

My TV/film files and folders have two origins (or schemes if you like):
Both Plex and VS use these two sets of folders for their libraries and 99.9% of the time all is well. The most problems come from tagging when something obscure is used to tag an item with a short, common name.
Upvote 0

Two comments to the OP... Yes, the Plex naming convention works well for Video Station. Synology offers a naming convention for VS, but it is quite simplified, and covers the basic, plain vanilla tv-series and movies). But where you have multi-episode tv files or overlapping movies (commercial cut/director's cut) the Synology naming convention lacks clarity. Using the Plex style has never failed me.

Re: metadata... the vsmeta files sit alongside your video source files. Mt experience is that export/import is unnecessary if you copy over your media file structure, including the vsmeta files to the new unit. Video Station should immediately recognize those once you point VS to your media directory (try this with a single media file to convince yourself it works).
Upvote 0
S

Thank you both!
@fredbert, it is a simple and excellent idea to manually correct all the certifications (I should have thought of that some years ago. Just between the UK, France and USA, the principles of rating are often quite different. A lot of work though...

@Telos, re: the metadata, if I simply copy over the structure and it picks it up, that is perfect, so thanks. Presumably though, on my new NAS, I must create the libraries first, yes, then copy over each library in turn? (Under Movies, for example, I have four libraries (English language, English language Kids, French language, French language Kids). It made sense at the time (when son was young), but now the years pass and soon this approach will not be serviceable. The different libraries for subtitles in the appropriate language are necessary though.

As for naming conventions, thank you again. I will have to look at the Plex ones. (I fully accept your words, because the VS system usually (but not always!) works.)

So, in summary, I will have quite a bit of work after all... Still, working this out for myself would have taken ages, so thanks!
Upvote 0

Regarding age classification:
Regarding manually tagging: VS only allows one item [episode/film] to be selected and edited at a time; Plex allows you to select as many as you want and changed tag data is applied to all of them.

Conclusion: Plex is much quicker when manually editing tags. Using age classifications is free only on VS.

It is possible to have multiple audio format/language tracks in video files. When I can I keep .srt subtitle files too. The default ones to select can depend on the DS video/Plex player device's setup. I'll admit the dual library approach is simpler.
Upvote 0

silverj said:
re: the metadata, if I simply copy over the structure and it picks it up, that is perfect, so thanks
Click to expand...

Just to clarify... when I said "structure" that would not require you to keep your present four libraries, but only to be sure that the vsmeta files accompany their related media file (same folder for vsmeta and video files).

So dropping to two libraries, for example, English language and French Language would be fine. So it might look like

Thank you both for the additional explanation. I shall have fun with this I can see. A shame that I had to replace my DS414 really, I do not have time for all this. Mind you, volume size of 16TB and no virtual machines or Docker (I thought this would be easy, but as I read more, it looks anything but!) rather made it necessary...
Upvote 0