What did you do on your Synology NAS today?

Currently reading
What did you do on your Synology NAS today?

Updated 3 DiskStations to the latest DSM, remotely, and all went well

I put vinyl decals on my DS418play disk trays. Why? Because I could. And, I like orange.

iamclaus said:
I put vinyl decals on my DS418play disk trays. Why? Because I could. And, I like orange.
Click to expand...

Seen this on reddit a few days ago . Nice one.
R

I am sorry to inform you, but you got it wrong 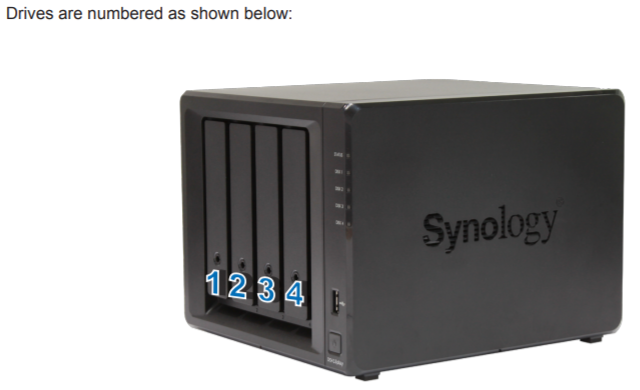 Telos said:
I am sorry to inform you, but you got it wrong

Yes, I know. I've shared the photo to other forums and platforms and the discussion seems split between those who adhere to the markings on the enclosure and with DSM, and those that prefer starting at 00 because other platforms use that notation, or they just think it look geekier? Either way, the decals are ultimately just for decoration, really.
T

nothing too exciting, patching and updating vm on the ds1618+ super quick loving it.
T

Installed 2 new Wyze Cam v2 to Surveillance Station to replace an old D-Link DCS-5222L. Much better resolution now, and they both respond much faster than the old DCS-5222L.

Migrate my last NAS (918) to the rack and shifted it towards SSD. Migrated RP role to a new NAS as well.

Moved my UPS around so that the bigger one is now supporting the two DSM NAS. It used to be needed for the old radiator iMac but the Mac Mini and LED monitor are much lower power consumers.

Today I've updated some containers in Docker, but a few days ago I've updated my VDSM to DSM7. Played with Photos...

I don't see what all the fuss is about. It's not much different.

I've been working out that DSM7 allows upnp2 rules to persist even if a QuickConnect or DDNS instance is closed and disabled. If the rules are manually cleared and DSM7 is restarted or awakened from its slumber the unused and unneeded upnp2 rules are forwarded to the router again.

Why do we spend ages trying to work out why they changed something that wasn't broken in the first place?

Then again I am on bed-rest after 4-days unexpectedly in hospital, so I guess I have time to burn...

Feel better and don’t stress on the dsm7 front

Tedster said:
I don't see what all the fuss is about. It's not much different.
Click to expand...

Last week I discovered that one of the spokes just decided to stop syncing for about 3/4 weeks....
So, within 'Drive ShareSync' on the rouge spoke NAS I had to resetup the sync by deleting the synced databases of the impacted shares and initialized a new sync. Everything re-synced again but obviously had to manually fix a few conflicts as file/folder edits are done over the multiple NAS"es.

This is not the first time this happened and these boxes give absolutely no warning. Need to figure out how to monitor this. If I had some Windows machine running 24/7 , I could write a PowerShell script to just create a dummy file and check if this file appears on all the NAS'es as a way to monitor the syncs.

Where did move the personal playlist-folder too in DSM 7.0?
Yes you’re right, but that only applies when you have enabled the personal music folder in the...

M
Data protect and backup on Synology
No maybe I explain it bad. The backup that in set in my external usb hard drive start once a week. The...

Synology NAs slow to wake up.
Hi All: My Synology NAS (DS118 and 2xDS218play) are very slow to respond afetr they go to sleep (can...

Synology Drive "Reconnecting" and Active backup has a connection error
Lan only. Thank you

O
Help with understanding nginx and synology
Hi, I hope someone here can help me! I'm failry new to the Synology ecosystem (got myself a treat during...

3. Jan 2022
oromier
O
M
Two synology units not powering on after being dropped
Having been known to balance my lunch things on top of each other when trying to do one trip from the...