What’s your experience with Chat?

I’m thinking of deploying Chat for our small project group. However, I’m not too sure of its usefulness.
Last I read is that one can not delete messages easily!

If you’ve implemented Chat and used it, I’d be very grateful if you can share your experience.

Advantages/disadvantages that you have experienced.

I tested it once. It was nice experience, but can't say much about it, because I tested only for myself, didn't have it for a group of people.

As far as I remember there where no major disadvantages, but not sure if it works like Slack or Rocket.chat.

WST16 said:
I’m thinking of deploying Chat for our small project group. However, I’m not too sure of its usefulness.
Last I read is that one can not delete messages easily!

If you’ve implemented Chat and used it, I’d be very grateful if you can share your experience.

Advantages/disadvantages that you have experienced.

I was really excited when Chat was announced but when I started to play around with it, it had lots of bugs that really bothered me. Later on that was fixed and all in all it worked fine. The main problem atm that I have with it is that's tied into DSM regarding users (even with non-DSM user registration now being offered). Having to populate lots of users just to use that feature is something that really wasn't my cup of tea.

On the other hand, if those same users use Office, Calendar and some other apps on the NAS then I see the benefits for it in the long run.

Still saying all this if you are looking into a separate non-Syno chat platform that's open and feature-rich, you could look into Rocket.chat. Personally, I love it and use just because I wanna have a separate chat platform that I can easily move from one platform to the other (or host) and its not connected to DSM authentification in any way.
Running it in Docker with MongoDB in the back, its light, fast and offers what any SLACK/Microsoft Teams/Matrix platform has to offer. Plus, its fully customizable, something that Chat for example is not.

Thank you @SynoMan and @Rusty.

Didn’t know about rocket.chat. I’ll definitely check it. I might add it to the BW project on Docker
I particularly like that it’s separate as you stated. I don’t need Synology’s Chat integration at the moment.

Didn’t know about rocket.chat. I’ll definitely check it. I might add it to the BW project on Docker
I particularly like that it’s separate as you stated. I don’t need Synology’s Chat integration at the moment.

If you want I can invite you to my chat for a demo. It's not English speaking one but everyone understands English ofc. If you want just shoot me a PM.

Thank you @Rusty. You’re too generous

I have a long trip coming. It’s not a vacation
I might do that after I’m done. I’ll keep your kind offer in mind. Thanks a million.

No I havent, but thats just a few clicks to activate. People on chat are more old school IRC members so voice is not a priority. But it does work without problem.

There are 2 platform for voice and video. One is rocket.chat own platform, still in development and the other is Jitsi. Also it support public accessible Jitsi or a private Jitsi platform.

UPDATE: I have activated video chat for direct messages on my server. Works great from mobile as well as desktop apps. It supports screen sharing and session recording as well.

I should’t be stating new things before a trip, but my curiosity got the best of me
I’ve installed Docker and through the registry found the following:

I don’t know what’s the difference between them. I tried the first and the 2nd. It looks like they both start fine, but after about a minute or less, they quite unexpectedly.
I ran the container with the default settings. Any advice please?

Do you have a mongo db setup?

WST16 said:
I don’t know what’s the difference between them
Click to expand...

Use the second one. Thats the official up to date image

Ahhh, I’m afraid not
Where one finds that? Synology packages?

Ok. Mongo Is under Docker’s registry. But again, many versions.

To get started with Mongo you will have to tackle a bit of terminal and mongo command line. Also to connect RC with it you will have to setup a specific environment variable.
Mongo would be best to run under Docker as well.

I see. It’s not something I can do in a jiffy. I’ll try to check the above and see. If I can’t make it work, it’ll have to wait.

It’s not complicated but it will take some time especially if you haven’t used docker mongo or rocket.chat before

I can’t figure this one out for the life of me. Everything seems to be in order. Yet rocket chat fails to stay up because it can’t connect to mongo! Appreciate any suggestions. Thanks.


Mongo is up and running with no apparent problems. When I start rocket.chat, it comes up for about a minute and then dies with the below in the log. 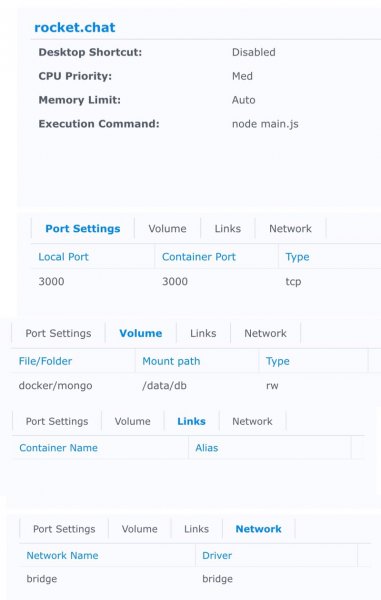 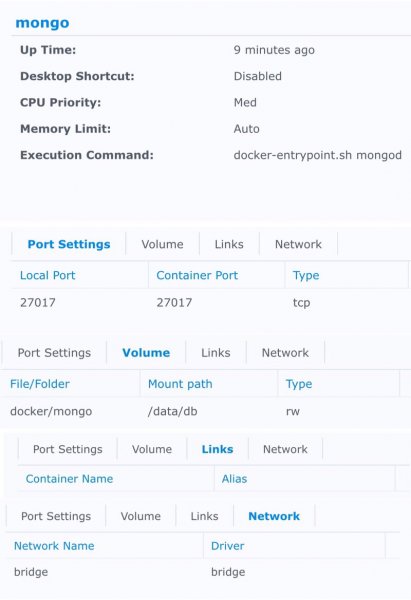 rocker has to connect to mongo via Links option as well as with an environmental variable on the rocket side.


Code:
You need a username, password and a db name along with the port number that your Mongo is running. Leave it like I wrote it considering how you have it configured.

I guess I’ll put this one on the back burner until I’m back.
I know you said it’s easy, but one needs to know where to enter that and how to set the user/password on mongo. I don’t.

From mongodb wiki:
“Due to the default security configuration of MongoDB, allowing anyone to have full access to the database, data from tens of thousands of MongoDB installations has been stolen. Furthermore, many MongoDB servers have been held for ransom.
From the MongoDB 2.6 release onwards, the binaries from the official MongoDB RPM and DEB packages bind to localhost by default. From MongoDB 3.6, this default behavior was extended to all MongoDB packages across all platforms. As a result, all networked connections to the database will be denied unless explicitly configured by an administrator.”

I’ll try to read more about Docker too. I wanted to wing it to give it a quick test, but I think that’ll have to wait for another day.

K
Questions about Chat
best way for the Rocket. Chat help is open new thread, because ordnung muss sein. Then you have these...

Chat Beta ver 2.2.0 1423 - tested
Today I found accidentally hidden feature in the Syno Chat for iOS: 1. if you need chat about a specific...