Which app for streaming server?

Hello all: I want to stream music from my DS218play to a NAIM NDX streamer. I've been told I need to install a server app on the NAS to do this, but which one - audio station or media server? I currently stream both audio and video to Kodi to my TV on my Amazon Firestick but was told in no uncertain terms that I need a server app for the streamer(?!)

It depends on how you want to operate it. Audio station can be used to push the music to the NAIM, you operate Audio Station and tell it to stream the music to Naim.
if you want to do it the other way around; operate the Naim app and pick up music files from the Synology by mapping the music folder.
if you prefer you can then also use the synology media server as a source and find your music in that way.

I found this user manual when searching ‘naim ndx’:

On page 18 it covers connecting to and navigating menus of a UPnP media server. On the NAS you need Media Server.

If the NAIM NDX supports connecting directly to a SMB/CIFS shared folder then I'm willing to bet that it will be just like other network streamers and only support SMB v1. Which is vulnerable and shouldn't be enabled on the NAS. My Denon HEOS devices only support SMB v1 even though they get fairly regular firmware updates, and so I don't use this method of accessing music files.

Audio Station, as @EAZ1964 said, can often be used with a DLNA/UPnP speaker as the audio destination (doing this with the mobile app with make the app a remote control between AS and the speaker, i.e. the stream is direct between AS and speaker and not via the phone)... 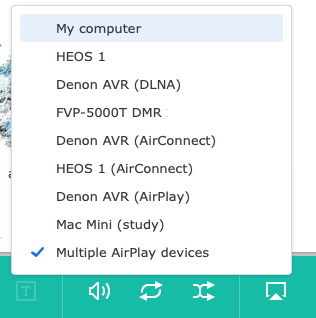 You can see I have a mix of DLNA(/UPnP) receiving devices and AirPlay. I also use AirConnect in Docker to add AirPlay to some DLNA/UPnP device.


Going back to Media Server: once you have it working and can see it and play media from the NDX you can then play around with the menu layout so that you can access the music how you like it. I found using an SSDP interval of 5 seconds helped keep the server visible.

Plus created a custom menu to make it easier to access my separate folders of music: standard quality (320kbps AAC /256kbps MP3); CD quality (ALAC); Hi-Q (anything better than CD). 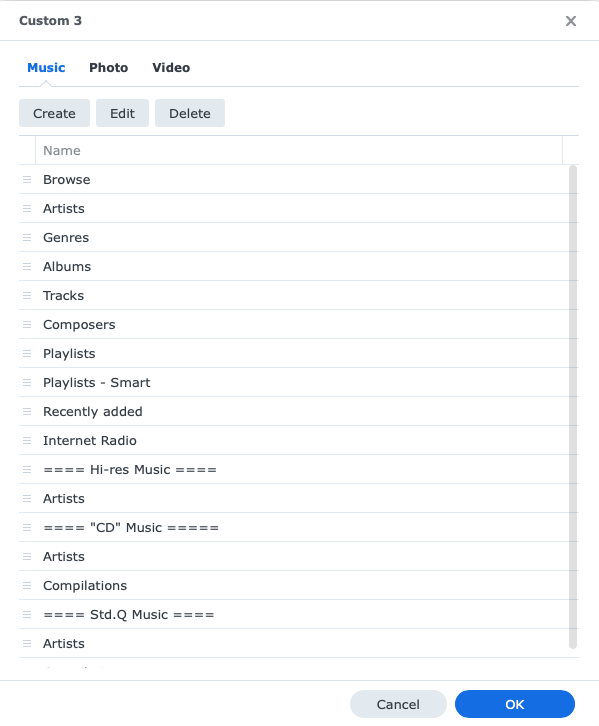 Last edited: Saturday at 12:33
"It will be just like other network streamers and only support SMB v1"

EAZ1964 said:
"It will be just like other network streamers and only support SMB v1"

That may be the case but my Audiopro equipment does use SMB3
Click to expand...

I'm sure I've seen others having issues with network audio devices and the DSM 7 move to default to SMBv2. The NDX 2 seems to be the current device so I assumed NDX is older.

I'm sure I've seen others having issues with network audio devices and the DSM 7 move to default to SMBv2. The NDX 2 seems to be the current device so I assumed NDX is older.
Click to expand...

Sorry it is not meant as bragging;
it is meant to address an incorrect generalising statement on audio streaming devices.
Anyway I apologise, both posts are not helping the OP and off topic.

EAZ1964 said:
Sorry it is not meant as bragging
Click to expand...

I knew that. I wish Denon fixed it. I don’t want to mention other brands that still need SMB V1 as it would mean researching it but I think it was some popular brands.

Still it is a subject that it is worth being aware about.

Don’t know if it’ll work in this case (streaming to an external device) but I suggest trying Navidrome –check the demo– instead of Audio Station. I’ve been using it for a while now and I absolutely love it.

I believe my current NAIM HDX uses SMB1 but everything is local to the HDX (2 x 500gb internal HDDs). It can access a NAS for backup purposes. The thing is, the HDX isn't really supported by NAIM any longer so I've backed everything up on the NAS and am looking for a NAIM streamer that doesn't cost an arm and a leg and that I can use pretty much as I did the HDX (ie controlling everything from the streamer/streamer software vs controlling if from the NAS).

P
See photo thumbnails on iPad files app
I don't know if this helps, but I have DS File listed in the Files app. Going through DS File to my shared...

Synology Photo app sign-in on a TV
It is for Photo Station users (pre-DSM7).

Is there an app to check ABFB progress?
I didnt think so, thanks

DS Manager Pro iOS app
Thanks for the pointer to this app.

Is there not one good backup app to achieve all of this?
Have a read here ( section Back up files agent less): https://www.blackvoid.club/3-2-1-active-backup/